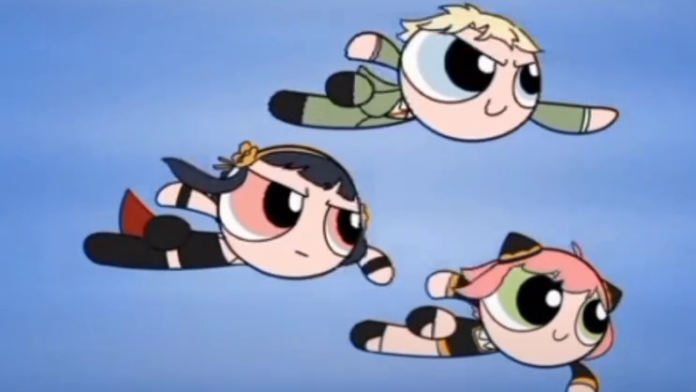 Spy x Family is an ongoing anime, adapted from the manga with the same name by Tatsuya Endo. Powerpuff girls, on the other hand, is an American animated series that aired from 1998 to 2005. In this hilarious video, the artist recreates the Spy x Family cast as the Powerpuff Girls.

Spy x Family’s story follows a spy, going by the name “Twilight,” who has to build a family to complete a mission. What he doesn’t realize is that the girl he adopts is secretly a telepath. Moreover, the woman who agrees to the fake marriage is secretly an assassin. It is a Shounen comedy anime with quite a bit of action.

Meanwhile, Powerpuff Girls is a story about three young girls who have superpowers. They were created by Professor Utonium in his laboratory after he accidentally added an ingredient, Chemical X. Now these girls protect Townsville from supervillains, fighting evil and monsters.

Here, Loid, Yor, and Anya take the place of the three protagonists, Bubbles, Blossom, and Buttercup respectively as they soar in the sky.

The artist also replaced the villains of Powerpuff Girls with characters like Damian Desmond and his friends, Donovan Desmond, and Murdoch Swan.

The most amusing part of the video was the Anya punching Damian scene but recreated in the Powerpuff Girls style. Even though the punch was replaced with a kick, the addition of her iconic smug face to the scene is enough to get you laughing.

In the end, we see them standing over a pile of their “enemies” which was a rather wholesome frame.

However, we know that this concept is far beyond impossible, knowing how Loid and Yor aren’t aware of the other’s real identities. Additionally, the characters portrayed as the “villains” are rather just people who stand in their way or create problems for them. Moreover, in Damian and Donovan Desmond’s case, Twilight just wants to get closer to them. The reason given as of yet is to gather intel and prevent any conflicts between Westalis and Ostania.

Nonetheless, the concept is really adorable and hilarious. You can watch the winsome video for yourself below. It will surely put a smile across your face. If you do enjoy the video, make sure to give the creator some support!

In the video, “By Yimu” is mentioned. But we couldn’t find the account of the video owner. So, if you do know the video editor, do let us know in the comment section below.

That’s all for this adorable Spy x Family and Powerpuff Girls crossover. Moreover, you can also check out how Anya took over multiple fandoms or this Anya Forger fanart collection. For more anime content, stay tuned to Retrology.

Laiba Razi
A student who enjoys watching anime and movies, playing games, and helping others.