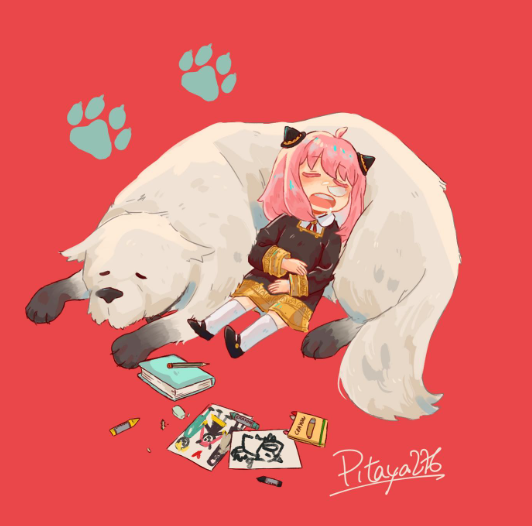 Spy x Family has met all expectations since its anime debut. Being produced by two amazing studios, Cloverworks and Wit, this anime has the potential to become one of the most loved ones for this year. The characters have already piqued the interests of viewers since the airing of the first episode. The show’s main character, a spy known as Twilight, takes on the alias of Loid Forger, and he must adopt a child for his latest mission. The adopted child becomes Anya Forger, an incredibly cute little girl who has the power to read minds. Feast your eyes on the best Arya Forger fan art below.

Anya is a telepath who got these abilities because of an experiment held by an unknown organisation. The fan art above shows Anya with Yor Forger (middle) and with Damian Desmond (right). Yor Forger, who is actually an assassin, is pretending to be the wife of Loid Forger and an adoptive mother to Anya.

The absolutely cute fan art above she’s the different personas of Anya. You can see her different range of emotions in the central fan art, which is seen when she starts overthinking and becomes confused after reading someone’s mind. The third fan art features Anya in a very adorable kimono.

The artists here have imagined Anya in various different scenarios. You can see her in her sleeping suit stretching very fondly with her plushies. The other fan arts show her more aggressively cute side where she’s holding a pistol. Anya then enrols into the Eden Academy as a part of Twilight’s plan.

That was some of the best Anya Forger fan art we had for you. It will be very interesting to see how the anime progresses because manga fans will have many hopes for it, considering the fact that Spy x Family is a successful ongoing manga that has finally gotten an adaptation.

Check out some cool Loid Forger fan art or read up on the Episode 1 review. And you can keep following Retrology for more fan art.