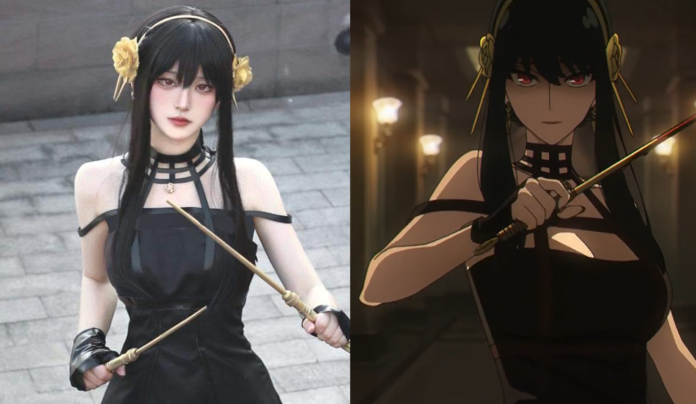 Spy x Family is currently the most hyped anime of the season. Being adapted from an already famous manga, Spy x Family already had a big fan following. Despite only being two episodes in, the anime is receiving huge amounts of traction. And the fans, rightfully so, want to be a part of the experience. Because of that, we have seen a lot of Spy x Family fan art emerging in recent days and now we’ve finally got cosplayers entering the fray as well. Feast your eyes on the dazzling Yor Forger cosplay below.

Spy x Family is the perfect combination of the spy/romance subgenre. The show follows Twilight, a very powerful spy, as he looks to recruit a fake child and a fake wife to fulfill his latest mission. And this is where we see Yor Forger, who would be the one pretending to be his wife.

Yor Forger is herself an assassin who kills for a living and Twilight, who himself is hiding his true identity, has no clue about this. However, their adopted child, Anya, has the power to read minds. She figures out everything.

It is interesting to see that with just a slight change of emotion, the whole cosplay is giving off a different vibe.

The cosplayer here is Liu Wantongtong (刘婉彤彤) who shares her cosplays on Tiktok or Douyin, as it is known in China. She has 28.2 million followers and 496.5 million likes as of April 2022. You can follow her using her Douyin number: kth19951230kth.

Her cosplay skills come unparalleled considering how well she has transformed herself into Yor Forger. The attire and even the weapons are very much identical to the actual character making this the best Yor Forger cosplay we’ve seen yet.

We’re actively covering Spy x Family content along with other anime and manga content. We have fan arts for Anya Forger and Loid Forger among other interesting things you would love to see. Keep following Retrology for more content in the future.

The Female Doom Slayer cosplay is here to slay...