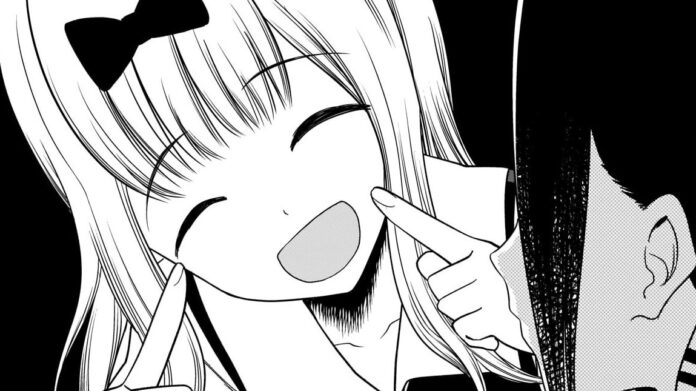 Kaguya-sama: Love is War is a romance psychological manga written by Aka Akasaka, and adapted into an anime of the same name. The story follows Kaguya Shinomiya, daughter of the wealthiest family in Japan, and Miyuki Shirogane, who is not from a wealthy family but is incredibly smart. Both of them engage in mind games and devise lengthy strategies, all for one goal. To make the other confess first. The latest chapter of Love is War showed Kaguya’s attempt at trying to be more affectionate toward Miyuki. Before we continue the Kaguya-sama Chapter 264 Manga Discussion, please be aware that this will contain spoilers. It is advised not to continue if you are interested in the story and have not caught up with the manga.

Contents
1) The Suffix dilemma
2) Miyuki’s Past

This chapter brought us many wholesome scenes. While preparing for Kaguya’s Rescue Mission, Miyuki picked up the habit of calling her Kaguya instead of what he usually called her, “Shinomiya”. Kaguya, upon noticing this, was flattered and wanted to call Miyuki something else instead of “President”.

However, Kaguya struggles to figure out what to call him until Kei, Miyuki’s sister, enters the Student Council Room. Seeing Chika call her “Kei-chan” sparks an idea in Kaguya’s mind. Amazed by how adorable it sounded, she came to the conclusion to call him “Miyuki-chan”.

Moreover, we can tell that Kei still has great admiration and love for Kaguya. After Kaguya tries calling her “Kei-chan” as Chika did, Kei is taken by surprise and blushes. Although Kei is friends with Chika too, she doesn’t look up to her the way she does to Kaguya. She is also concerned for Kaguya after she figures out what Kaguya is about to call her brother.

After a long time, we see another glimpse of Miyuki’s past. Kei recalls what happened the last time someone called him “Miyuki-chan,” showing us a young Miyuki beating up a kid. Miyuki is often used as a female name, and adding chan to it makes it seem even more feminine.

Kei is scared he’ll be infuriated when he hears Kaguya call him that. But, to her surprise, he seemed overjoyed when Kaguya asked if she could call him “Miyuki-chan”. Even so, he does not stand when Chika asks the same thing, showing the soft spot he has for Kaguya.

This chapter was really wholesome and funny, which makes the fans wonder if this could be the calm before the storm. It’s also revealed that Miyuki will be leaving for Standford in two days, which may mean that the next few chapters may get more heartbreaking. That’s all for the Kaguya-sama chapter 264 discussion. You can also check out the latest One Punch Man chapter‘s review or the previous Kaguya-same chapter review. For more manga content, stay tuned to Retrology.