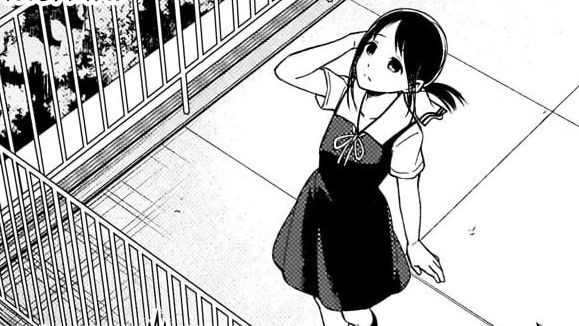 Kaguya-sama: Love is War is a romance psychological manga written by Aka Akasaka, adapted into an anime of the same name. The story follows Kaguya Shinomiya, daughter of the wealthiest family in Japan, and Miyuki Shirogane, who is not from a wealthy family but is incredibly smart. Both of them engage in mind games and devise lengthy strategies, all for one goal. To make the other confess first. The latest chapter of Love is War showed the heartwarming interactions between the high school friends. Before we continue the Kaguya-sama Chapter 263 Manga Review, please be aware that this will contain spoilers. It is advised not to continue if you are interested in the story and have not caught up with the manga.

We have known that Shirogane will be leaving to study at Stanford since the Cultural Festival Arc. Now the day seems to be drawing very close. We see Kaguya, at the beginning of the chapter, hoping to make more memories with him before he leaves.

Additionally, in the Student Council Room, Chika is also preparing for his departure with games to play with the rest of the Council members. This makes us wonder if the end of the manga may be closer than we think.

After seeing Maki fawning over Tsubasa, Kaguya tells her that it might be time to move on. Maki, unable to tolerate her insulting Tsubasa, starts making fun of the President. They also talk about how Kaguya visited the Shijo’s to try and convince them to rethink the marriage planned between Kaguya and Mikado Shijo.

However, Kaguya is quick to remind Maki how she herself came to her side to convince the elders. After continuing to argue, Kaguya starts making Maki jealous over how she doesn’t have a significant other yet. Not soon after, Maki admits to being jealous when Chika, Iino, and Ishigami come up behind them. Unable to explain the situation to them, Kaguya admits defeat.

This chapter was much lighter than the previous ones ever since the last arc started. Now that Kaguya is finally on good terms with her family, everyone is excited to see what path she takes next. Besides that, the recent attention on Maki has readers hoping she finds her happiness before the manga ends.

That’s all for the Kaguya-sama chapter 263 review. You can also check out the latest One Punch Man chapter‘s review. For more manga content, stay tuned to Retrology.

Vagabond final chapter that fans have been waiting for