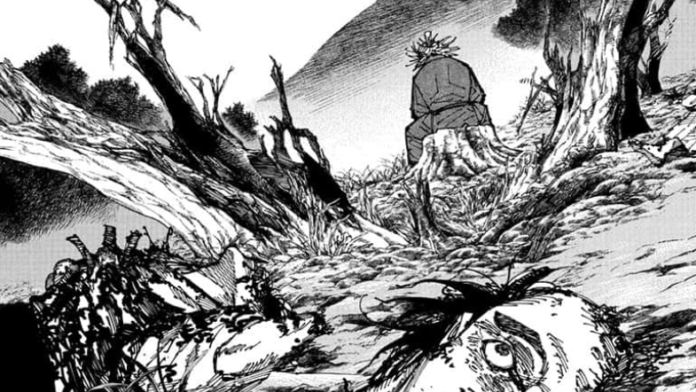 Jujutsu Kaisen is a Shounen fantasy anime, based on the manga by Gege Akutami. The story is about a high schooler, Yuji Itadori, who becomes the vessel for one of the strongest Cursed Spirits, Sukuna, after eating one of Sukuna’s fingers in an attempt to protect his friend. Yuji is taken to be executed to get rid of the finger inside him. However, it is decided that since most normal people can not eat Sukuna’s finger and survive, he’ll be fed all of his fingers and executed after that. Until then, he must join the Tokyo Metropolitan Jujutsu Technical Highschool and train as a Jujutsu Sorcerer. Here we will discuss the latest chapter of Jujutsu Kaisen, Chapter 187.

Before we continue the Jujutsu Kaisen Chapter 187 Discussion, please be aware that this will contain spoilers. It is advised not to continue if you are interested in the story and have not caught up with the manga.

The highlight of this chapter was surely the part where Hajime’s past self is revealed. Kenjaku had met him 400 years ago, we can see him sitting on a rock in a field of corpses. This is also when he agreed to join the Culling Game.

It should not come off as a surprise, but Hakari and Hajime Kashimo’s battle is still going strong. After Hakari used his Domain Expansion, the only way for Kashimo to exit it is to kill Hakari.

It is hard to understand who has the upper hand in their fight. Kashimo’s full potential is yet to be shown and he is still figuring out how Hakari’s domain works.

Hakari’s domain has been explained as well, he is either Immortal or not Immortal in the “Probability Change” state. He was easily able to survive Kashimo’s attacks when he was in his not Immortal state. As he changed his state for four minutes and eleven seconds and became Immortal, Kashimo, being confident in his abilities, decides to defeat him when he’s in his Immortal.

Even though it would be easier for him to defeat him when the time ends and he becomes not Immortal again, he still makes up his mind to fight him right then.

That is all for our Jujutsu Kaisen Chapter 187 discussion. Additionally, you can also check out our Spy X Family Chapter 63 or One Punch Man Chapter 165 discussion. For more manga discussions, stay tuned to Retrology.