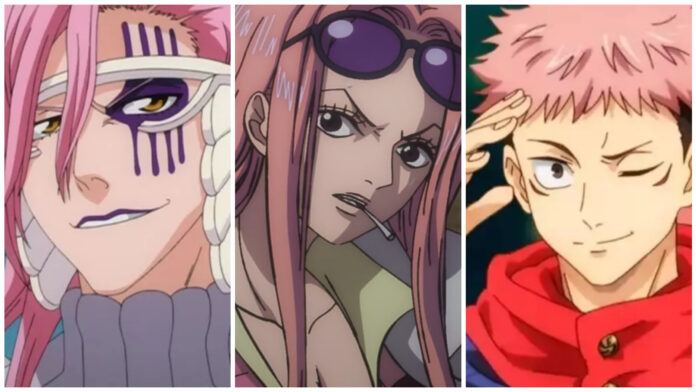 Ever since anime was introduced, there have been a number of weird colors for characters’ hair, eyes, skin, etc. which are really not natural in the real world. These unnatural colors make the character more recognizable or sometimes are related to the color palette of the anime. There are many anime characters in the whole community but we are only going to cover 22 anime characters with pink hair which are a lot of fans’ personal favorites.

Before we head into the sea of pink, here are other lists of anime characters having similar characteristics. If you’re interested, do check these out.

Keep in mind, Pink doesn’t always mean cute so warning as there are some really interesting characters here. Now let’s get onto the list!

Let’s start with the love and joy of many nowadays. Anya Forger, the child from Spy x Family. You would be lying if you say you haven’t heard or seen her. She is plastered all over the internet with cosplays and fanart so she might’ve crossed your eyes. Apart from being cute, she is quite good at other things too but you need to watch anime for that.

Gilthunder is the son of Zaratras, the former Great Holy Knight, and a Diamond-ranked Holy Knight. He may seem like the most powerful knight but he really isn’t. He was cold and brutal but reforms after a while. He is driven by his ambition against Seven Deadly Sins and this is a remarkable thing about him.

Szayelaporro Granz is the Espada’s fastidious intellectual, the scientist. He is exceedingly arrogant and showy, making filthy and frightening remarks about his opponents. He is merciless, harsh, and sadistic, and regards others as nothing more than study material. I think he is the epitome of evil and if you wanna see evil as a person, here is Szayelaporro.

Jewelry Bonney, popularly known as the “Big Eater,” is the captain of the Bonney Pirates and a pirate. She and her crew were from South Blue. Bonney, according to her title, is a gluttonous individual with terrible table manners. You wouldn’t see her without food anytime, that’s for sure!

Saiki Kusuo, the primary protagonist of The Disastrous Life Of Saiki K, possesses a variety of psychic talents. He remains serious due to some problems he encounters by showing emotion. Also, his shocking pink hair can’t be ignored for pink haired anime characters list. If you like reality-based anime with some elements of powers, then this anime, particularly this character will become your favorite fast!

The primary female heroine of the anime series Guilty Crown is Inori Yuzuriha. She is a member of the Funeral Parlor opposition guerrilla group. Her unusual cold yet half-emotional demeanor adds a unique element to the story.

The only character who got so much hate in the first series and then redeemed herself is Sakura Haruno. She took her personality up a notch and proved that she is more than Sasuke’s lover. If you want to watch her true potential, check Naruto Shippuden as there she is truly amazing.

Zero Two (Darling In The Franxx)

The primary heroine and deuteragonist of DARLING in the FRANXX is Zero Two. She is well-known for her captivating charm and, of course, her pink hair. Did you know she was initially supposed to have black hair? She now has pink and has made it onto the list.

Chika Fujiwara, is the only sane character in the “Kaguya-Sama: Love Is War” universe. She keeps everyone hooked until she loses it too and then, she will show her wrath. She may look like the usual airheaded friend but trust me, she is not. I was shocked too that her portrayal is quite new and enjoyable.

Meet Mina Ashido, part of the Pro Hero class in My Hero Academia. Her complexion is a pale pink tone due to her Quirk, and she has rather square-shaped eyes with black sclera and yellow irises. She is quite athletic and can be very active most of the time.

The Yandere Queen! Or more like someone who invented the Yandere genre visually. Ladies and Gentlemen! Yuno Gasai. She is among the most popular anime characters with pink hair. No I’m not applauding her extreme violent actions but as a piece of fiction, I can fangirl on how good this character was written. If you like gore stuff, this anime would be the best choice to binge-watch.

Natsu Dragneel is the main protagonist of Fairy Tail, a prominent shonen manga/anime series. He is a Fairy Tail Guild member and a Fire Dragon Slayer. I don’t think much is needed for this fireboy as this anime has been around since 2006 and is really popular.

Hina from One Piece, is a Marine officer and Vice Admiral Smoker’s old classmate. She has been proven to be a considerate and logical individual, gently acknowledging her defeat after attempting to catch Luffy. Apart from being sensible, she knows a lot about history and is interested to know about it a lot.

Kaede is the primary protagonist and anti-hero of Elfen Lied, sometimes known as Lucy in her insane form or Nyu in her amnesiac form. She seeks vengeance since she was rejected by society. This is a wonderful series to binge-watch.

I know each and every one of us cried at this masterpiece of a movie. No, don’t deny that. Well, apart from giving us a beautiful story, the movie “A Silent Voice” gave us amazing characters one of which is pink-haired Shouko Nishimiya. She is deaf and we follow her and the male protagonist’s story. If you haven’t watched it, give it a shot. This is really underrated so give it all the love it deserves.

Hisoka Morow, also known as Hisoka, Hisoka the Magician, and Grim Reaper, is one of the primary antagonists in the Hunter × Hunter anime/manga series. He may seem like a clown but he has won over too many hearts and battles. So, now no one takes him lightly.

The character we all grew to adore as the episodes passed, Kojirō Shinomiya from Shokugeki no Soma. He is rude and strict but no one can disagree that he is one of the best cooks for a reason. And also he reveals his nice side so points for improvement.

No one can forget this character as she is decked in pink from top to bottom. Her name is Mine and she is part of the main characters from Akame ga Kill! anime/manga. She loves to use guns and is extremely talented in accurately targeting anyone or thing; long and short range.

Another memorable and explosive character, Mei Hatsume, from the manga/anime series My Hero Academia. She is a student from Class H-1 of the U.A. High School’s Department of Support and is a student of Power Loader. Her inventions are what help Izuku endure the pain and impacts easily. No matter what you say, her inventions are truly amazing.

Not many know about Krul Tepes as Owari no Seraph anime is not as popular as others on the list. Krul is a vampire and belongs to a hierarchy, ruling over others. She is a true politician and knows what and how to speak for herself. Don’t be fooled by her child-like appearance as she is more than a thousand years old. Vampire perks, I guess.

The main character and protagonist of the newly famous series, Jujutsu Kaisen, Yuji Itadori. Yes, he also made it to the list as a pink-haired guy. Although Sakuna also is shown to have pink hair as he is part of Yuji, we don’t know if he actually has pink hair.

I apologize to people who wanted to see her earlier in the list as she deserves. Unfortunately, her role is different, in some aspects, from other characters. Even though she is barely in the story, she plays a pivotal role making her important to the storyline.

List of Best Bleach Filler Arcs that you may...

New One Piece Yamato Fanart that will inspire you...

Spy x Family getting criticized for Anya Forger being sexualized