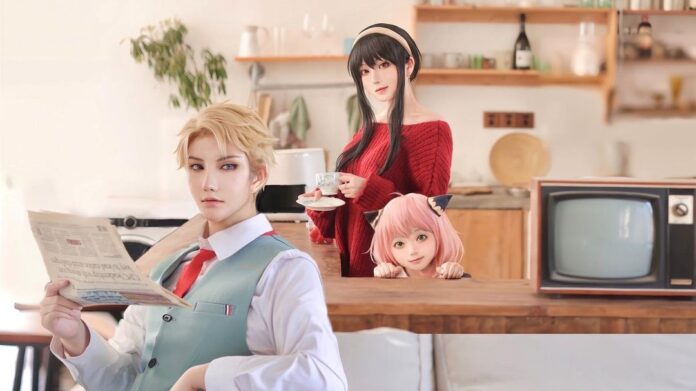 Spy x Family is an ongoing anime, adapted from the manga with the same name by Tatsuya Endo. The story follows a spy, going by the name “Twilight,” who has to build a family to complete a mission. What he doesn’t realize is that the girl he adopts is secretly a telepath. Moreover, the woman who agrees to the fake marriage is secretly an assassin. It is a Shounen comedy anime with quite a bit of action. This Spy x Family Cosplay is so realistic it brought the characters to life straight from the anime.

Cosplayers weilanran (Loid), lujiuerhei (Yor), and 我就吃一口嘛 (Anya) came together to give us these bizarre and on-point Spy x Family cosplays. Hold on tight cause these pictures are surely going to drop your jaws!

In this image, the cosplayer sits on a chair similar to the way Anya was sitting for the cover of Volume 2 of the manga.

Here, the cosplayer sits on a couch, adorably pointing at the television which is playing Anya’s favorite show, Spy Wars.

Loid’s cosplayer, similar to Anya, poses the way Loid was on the Volume 1 cover of the manga with a gun in one hand and a newspaper in the other.

With a censored gun, the cosplayer looks exactly like Loid from the anime promotional poster. The gun may have been censored to prevent the image from being taken down as it is more obvious in this photo.

Similar to the other two cosplayers, lujiuerhei sits gracefully like Yor from the manga’s third volume cover.

And here they beautifully pose as Yor from the anime promotional poster with two of the stiletto-type weapons Yor uses.

Now in this picture, all three cosplayers come together to bring us this image of them which is similar to the anime’s poster.

This picture brings the family together in the Forger Residence in their casual clothes. In the first image, Loid reads a newspaper and Yor can be seen drinking tea at the back while Anya peaks from over the counter next to her. Finally, the second shows them together at their table, where Yor and Loid share wine and Anya has her hot cocoa.

That’s all for this amazing cosplay. The cosplayers did an amazing job of bringing these characters to life in this Spy x Family cosplay. Be sure to check out their socials and send them some love. Moreover, you can also check out this stunning Jibaro cosplay from Love, Death, and Robots. If you’re interested in the Spy x Family manga, you can read this Chapter 63 discussion. For more entertaining content, stay tuned to Retrology.

The Female Doom Slayer cosplay is here to slay...