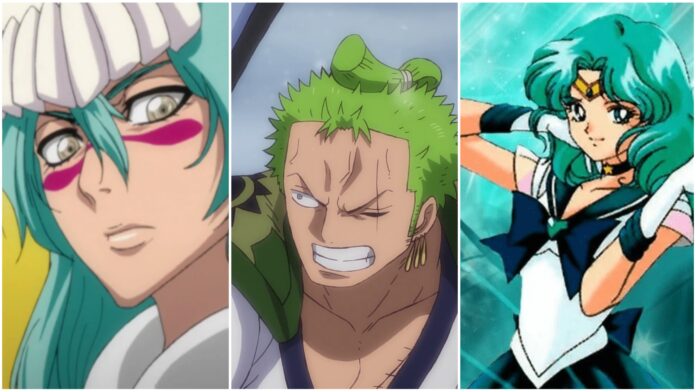 Zoro is the first person to join the Strawhat Pirates crew. Although he was a bounty hunter, he was moved by Luffy’s actions and has stayed loyal to him throughout the series. Besides that, Zoro spends most of his day training and sleeping. He is also well known in the anime community for being terrible at directions and has been the center of many memes.

C.C. is the right hand of Zero or Lelouch Lamperouge. Even though she’s mostly emotionless, she still shows stubbornness and selfishness when she’s with Lelouch. Being the one who bestowed him the Geass, she follows him around and often covers for him too.

Kaede Kayano or Akari Yukimura is one of the main protagonists of the series. Her green hair is actually dyed, she originally has brown hair. Putting up a façade as a merry side character, in the beginning, her true intentions are revealed farther in the series when she brings out her tentacles to avenge her sister.

Tatsumaki is the Rank 2 S class hero in the Heroes Association. She is one of the association’s strongest heroes and the strongest esper between her and her sister. Although an adult, she is often mistaken to be a child, not only because of her appearance but also due to her brash personality.

Maki Zenin is one of the protagonists in Jujutsu Kaisen. She leaves the Zenin Clan tired of the constant mistreatment she had to face for not being born a sorcerer. In the anime and movies, she uses cursed objects as her main source of attacks. However, later on in the manga, she changes drastically, becoming even stronger and rebelling against her clan.

Senku Ishigami is the main protagonist of the science fiction comedy show, Dr. Stone. After humanity turns into stone, it takes millions of years for Senku to break free. With the help of his friends, both those who had turned to stone and those who inhabited the current earth, he plans to restore humanity. Although he is physically weak, he is realistic, determined, and ridiculously smart.

Gon is the main protagonist of Hunter x Hunter. He has dark green hair which leans more towards black, but we just couldn’t miss him on this list. Gon is determined and optimistic, always trying to find hope in a dull situation. He is friendly and confident in his abilities. However, we see another completely different side to him when he finds out about Kite’s cruel fate.

Izuku Midoriya is the main protagonist of the shounen anime, My Hero Academia. He was born without a quirk which was extremely unusual for anyone. He is often reserved and polite, but he is also very determined. After receiving One for All from All Might, he went through relentless training to get stronger. Although he is still lacking, he keeps on getting stronger with each battle.

Kunikida is one of the main supporting characters in Bungou Stray Dogs. He is an essential part of the Armed Detective Agency and has the ability named “The Matchless Poet”. Kunikida has a tendency to keep everything organized and prepares his plans beforehand. He is calm and composed, but often gets annoyed with his partner, Dazai.

Bisca Mulan is a member of the Fairy Tail Guild. She is determined and loyal to her guild. After the Tenrou Island incident, Bisca still remained in Fairy Tail. She would eventually marry her partner and have a child, who also joins Fairy Tail, during the time skip.

Michiru Kaiou is the current Sailor Neptune. She is one of the strongest psychic characters in the series along with Sailor Mars. She is described as elegant, caring, and sharp and was even called the ideal princess by Sailor Moon. Sailor Neptune does, in fact, eventually become Princess Neptune.

Lastly on our lost of best Green-haired anime characters is Nel. Nelliel was formerly a part of the Espada where she ranked third. She is a female Arrancar whose true form is that of an adult. Her personality in her Nel form is completely different than her personality as Nelliel. Not only is her vocabulary severely lacking, but she also acts often acts in a childish manner. Meanwhile, as Nelliel, she is more mature and composed.

My Hero Academia Chapter 362 killed off a MAJOR character (Is...