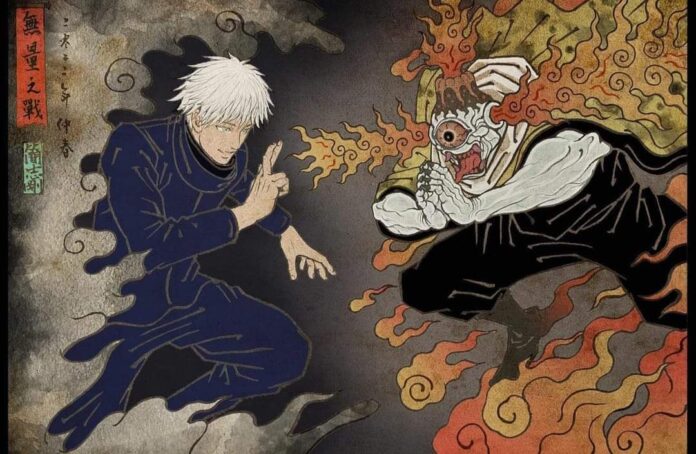 Before we continue, it should noted that the following images might contain spoilers for people who are not updated with One Piece manga.

This art shows the fight between Black-Foot Sanji and Queen The Plague of the Beast Pirates.

Here we see the “Pirate Hunter”Roronoa Zoro against All-Star King, also from the Beast Pirates.

In this final One Piece art, the artist shows the captain of the Strawhat Pirates, Monkey D. Luffy, using his Gear 5 against the Governor-General of the Beast Pirates, Kaido.

Here, the artist shows two of the iconic battles in Demon Slayer between Upper Ranks and Hashiras. The art on the left shows the fight between the Sound Hashira, Tengen Uzui, and the Upper-Rank Six, Gyutaro. Meanwhile, the one on the right shows the Flame Hashira, Kyojuro Rengoku, against the Upper-Rank Three, Akaza. Moreover, the artist depicts the Upper-Rank Demons as the Oni in Japanese folklore.

The same artist has also redesigned the Daki vs Demon Slayers fight and some other demons in his artsyle.

Not just that but we have Jujutsu Kaisen coverted to traditional Japanese art as well.

This is another Dragon Ball art, showing the clash between Frieza and Super Saiyan 3 Goku.

Be sure to check out the artist on Twitter if you liked the art. For more anime content, stay tuned to Retrology.