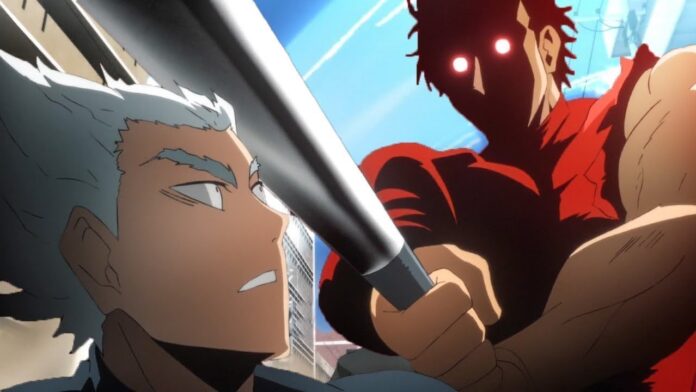 One of the major highlights of Chapter 156 was Saitama one-punching the Evil Ocean Water monster and literally splitting the ocean in half. While it seems rushed that after all the build-up, Evil Ocean Water didn’t even last a single chapter, it’s also sort of justified. Because that is how One-Punch Man actually works. Monsters first get hyped up and then they instantly get knocked out by our One Punch hero. Furthermore, to me personally, this felt right. As there was no time to waste given the destruction that Evil Ocean could have caused. So, Saitama realizing this and quickly killing the monster proves how much of a good hero he is.

Plus, not to mention, Saitama using a full-scale aircraft carrier as a surfboard was a hilarious and awesome moment at the same time. It makes us think yet again that on what level Saitama actually is.

One Punch Man Chapter 156 gave us a Deja Vu. Metal Bat was tossed to the ground near Garou by a centipede at the start of Monster Association Arc, and this exactly happened again in this chapter as Metal Bat rushed to fight Sage Centipede and got knocked down to the ground where Garou was standing. However, instead of battling with each other, this time they actually teamed up to beat the monster and save the rescue helicopters which sure was a sight to see.

Also, if they had fought, the fight really would have been a one-sided battle with Garou being the obvious victor. As Metal Bat wasn’t able to defeat Garou previously as well.

The Good Side of Garou

Garou has a tendency to be a complex character when being a straightforward evil-looking monster/hero bashing character he all of a sudden shows his soft side. In One Punch Man chapter 156, we got to see the heroic side of Garou once again. When he saw Tareo on the plane, he instantly showed care for the boy and started distracting Sage Centipede. He also jumped on a helicopter just to scare them off from the battlefield so they won’t get injured. Furthermore, he teamed up with a Hero to save the rescuees.

Is all of this a hint at Garou eventually becoming a hero? Well, if not a hero, then just a good character. Perhaps his long-awaited fight with Saitama gives him a reality-check of his good side and a change of heart. Well, let’s see what happens next.

I think Sage Centipede will be defeated by Garou and Metal Bat, while the latter being injured again. And then the stage would be set for Garou vs. Saitama unless any other hero or monster interferes.

That’s all regarding One Punch Man Chapter 156 discussion and analysis. Don’t forget to share it with your friends. Also, let us know in the comments what do you think of the chapter. We cover both news and reviews, so be sure to follow us on social media and here as well. See you in the next chapter’s analysis.

One Punch Man Chapter 165 Discussion: Saitama got punched by Cosmic...

List of all the characters that have defeated Garou in One-Punch...