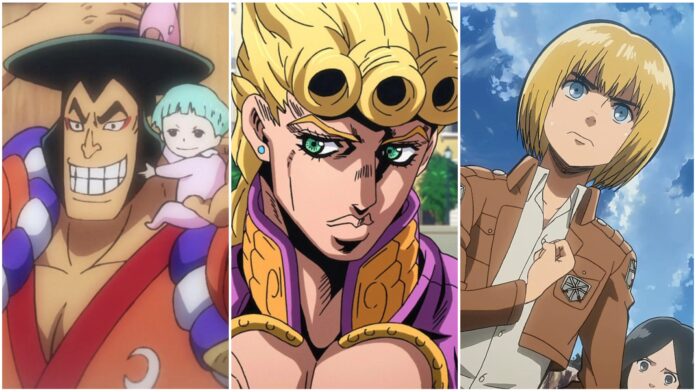 It’s a fact that anime have characters who have unrealistic and wild hair colors like pink and green. But most anime characters have really generic hairstyles for males and don’t reflect their role in the anime too well. Today we are covering a few characters with an anime hairstyle that is rarely seen and makes the character very recognizable.

The main character of one of the most famous and legendary anime, Dragon Ball. Goku is a character anime and non-anime watchers will both be able to recognize. His iconic spiky black hair has been carved into the minds of anyone who watched Dragon Ball on TV as a child.

One piece is not new to making characters with different and interesting hairstyles. One of the characters introduced in the new arc has a hairstyle hard to ignore. While they are long and slightly curly, the top is made flat and circular.

He is one of the supporting characters of the show Bleach. His aggressive and savage personality is perfectly portrayed by his spiky hair which spread in all directions. Moreover, these hair are most likely thanks to him washing his hair with soap every night.

Next, we have one of Jojo’s Bizarre Adventure’s main protagonists. This shows unique animation and art style make every hairstyle stand out. But Giorno’s three distinct large golden curls at the front of his head make him hard to miss.

The main protagonist of the show, Afro is a samurai who seeks revenge on his father’s murderer. As his name and the name of the series suggests, he has fluffy black afro hair. He’s one of the most prominent afro characters in anime.

In Berserk, Griffith is adored for his beautiful looks and charisma. And his long white hair plays an important role in making him look that handsome. Perhaps the white color shows his real cold and mysterious personality.

He is one of the most famous characters from the show and is a very talented ninja. He has spiky silver hair which stands towards his left side. Although his hair doesn’t seem all too complex, matched with his covered eye and mask, he’s very distinguishable.

Rengoku was one of the most impactful characters in the show and the center of the movie. His golden hair with bright red ends shows his fiery personality and his breathing style. Additionally, his unruly hair reminds one of flames.

He is the head of one of the four noble clans in Soul Society. He has long straight hair, with chunks of the hair fitted into white headpieces. In this anime hairstyle, these headpieces are perhaps used to indicate his position as a noble.

The Shipwright of the Strawhat Pirates. Franky has two extremely different hairstyles between the timeskip. Pre-timeskip his blue hair is slicked up and sideways. However, post-timeskip, following more modifications, he has a pretty much bald head but it comes with the ability to change his hairstyle within seconds.

Armin is another character who has two different hairstyles. At the beginning of the series, he has a long undercut with bangs. But in the fourth season, his hair is much shorter.

As the main protagonist of the show Yu-Gi-Oh, he is recognizable by most people who watched the show as children. His lush hair is black and magenta from the back and falls in golden fringes on his face. The colors used on this anime hairstyle are the main distinguishing feature.

Toshinori Yagi, commonly known as All Might is one of the secondary protagonists of the show. In his Hero form, two pieces of his blond hair are stuck up, completing his look like that of a comic book hero. In his normal form, his hair falls in streaks on the sides of his face and is much more unruly.

With that our list of some of the most unique anime hairstyles reaches the end. But before that, there’s a character from a manga who we believe has a rather interesting hairstyle.

Musashi is the main character of Vagabond, named after one of the most legendary swordsmen in Japanese history. He has long black hair tied in a ponytail not too low.

Now, you can check out our article on the coolest Samurai characters in anime. For more anime content, stay tuned to Retrology.

Best Demon Slayer quotes to give you a boost of motivation