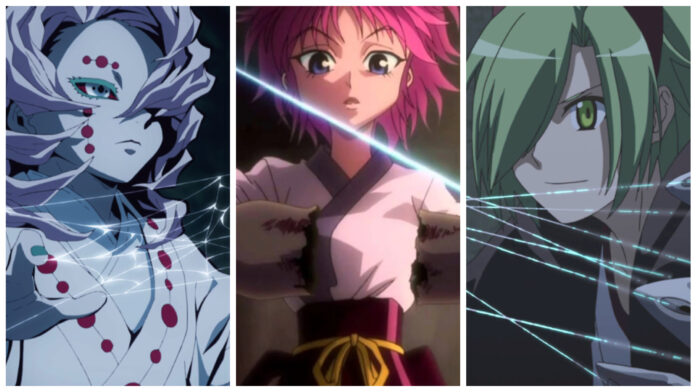 From swords and guns, many of the usual weapons are very popular in anime. Out of these, sometimes small tiny weapons can also possess deadly abilities. This weapon is made of string and is mostly underestimated. Users of string, wire, and thread can be among the most inventive weapon-wielders in anime. They stand out, perhaps more than many other types of weapon users. Let’s take a look at one of the best string anime users right now.

As Rui belonged to the Spider Household and possessed spider-like characteristics, many of his abilities and techniques involved thread and string-based offense. His thread manipulation made threads strong enough to interrupt blades and easily slice through people. Rui built a thread and string-based offense something to behold and fear with multiple deadly methods. His techniques prove that his rank is a well-deserved demon.

One of the most formidable magicians, Kaori Kanzaki is a great user of multiple abilities along with using Wire. She can not only cut her adversaries with seven wires that split into more, but she can also form her wires in a circle to make even more magical versions. Her use of wires is significantly more imaginative than most other wire, thread, or string users in anime, as she can summon someone or cast fire and ice spells using them.

Regarded as one of the greatest villains in One Piece’s history is none other than Donquixote Doflamingo. Everything about him, from his boundless charisma to his wicked glee, screams danger. His threads can be used to make clones, restore damage or injuries to his body, build barriers, control individuals with threads, and perform slash attacks. The primary problem is that his threads are unbreakable; even swords cannot cut through them. Let’s see if someone finds a way to break his strings soon.

From Naturo, Sasori is a puppet master and Akatsuki member. He controls puppets with chakra threads, and he can control more than 100 puppets at once. The dangerous aspect of him is that these puppets have been outfitted with weapons and poison so that a small cut can kill you. He went so far as to make himself into a puppet that even if his body is destroyed, he will stay unaffected if his heart simply moves to a different puppet. Genius move I would say.

The witch in Black Clover Vanessa Enoteca is a valuable member of the Black Bull team who, despite her sometimes sluggish personality and fondness for wine, has a specific affinity for Thread Magic. She has a three-leaf clover grimoire with which she can use several thread-based spells. Her Thread Magic allows her to make and control thread. This can be used to repair and alter comrades’ clothing or to be beneficial and effective in battle. She also knows how to alter fate and plays with strings to change fate accordingly.

Similar to other members of Akame ga Kill, Lubbock aslo got a Teigu, a wire Teigu known as “Infinite Uses: Cross Tail”. It is extremely powerful and has numerous applications, including attacking and defense methods. He was a very resourceful and great tactician who tended to plan several moves ahead of his enemies and would adapt well to a given situation even as it changed, such as when he killed Syura with threads he hid in his mouth after he was captured and his Teigu taken away.

In Corpse Princess, Rika Aragami is Saki Amasa’s Contracted Monk and the sole female monk of the Kgon Sect. She fights with claws linked to her hands. She can also make people immobile by releasing strings. Her attacks are a combination of claws and strings so she can slash and cut you through with her claws and strings one after another.

Yura’s signature feature is her razor-sharp hair strands, which can supposedly cut through everything even Inuyasha’s Robe of the Fire-Rat. The hair was composed of her victims’ hair, as she declared that once she killed Inuyasha, each one of his hair would be hers to control.

With a glove with unbreakable Orichalcum wires running from each finger as a weapon, Jenos Hazard uses it to grip and lacerate his opponents. He can also control them well enough to pick up objects without damaging them. His control is so exact and calculated that he can easily pick up things without causing visible harm, making the weapon adaptable and helpful in a variety of settings.

Known as the Hunter X Hunter’s strongest female character, Machi, possesses a highly high and hazardous skill with her Transmutation-type Nen. Machi will transfer aura into her threads with her Nen Stitches ability to track her target. Surprisingly, this skill, like Hisoka’s, can be utilized to reconnect the severed limb. Machi can also control the dead with her strings to fight.

Walter’s preferred weapons are Microfilament Wires, which can cut through steel and concrete while still being able of less-destructive use in binding and confining targets without injuring them. Walter can move the wires as if they were a part of his body, allowing him to delicately move or destroy anything as he sees appropriate.

Tsunagu Hakamada, better known as Best Jeanist, has the ability to unravel parts of his garments into fabric strings and control them to restrain targets. Because his hero suit is made entirely of denim, he always has a ready supply of readily controllable fibers to use and control.

We’ve also covered some more of the anime-related list content like characters with unique hairstyles, characters who are the best samurai, and even the best Scythe users!

List of Best Bleach Filler Arcs that you may...