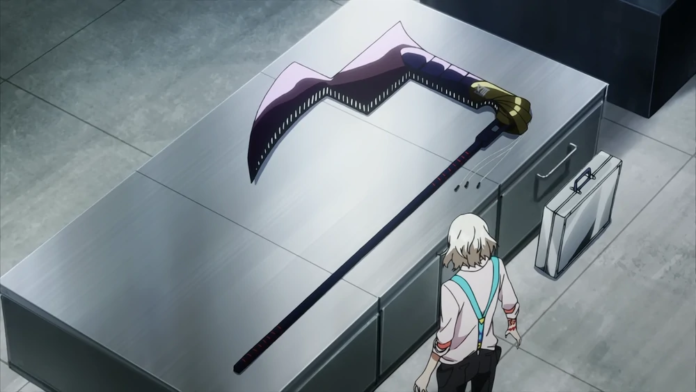 In action anime, creators don’t ever shy away from making characters with interesting weapons. Although swords or katanas are often thought to be the coolest, scythes aren’t that shabby themselves. Last time, we covered our favorite scythe wielders, here we’re sharing our top 8 anime scythes.

This weapon has two scythe blades coming out from each of them, one straight and one inverted. Hisagi uses the weapon in different ways, sometimes adding chains on their ends to throw them around. Furthermore, in the anime, this weapon has a spirit named Kazeshini inside who received a rebellion arc too.

This scythe is a Quinque in the form of a Scythe. It classifies as a Monster class weapon and has a gimmick that has not been shown in the anime. Its sides, although jagged, are sharp are large.

Even though it is one of Juuzou’s strongest weapons, he’s not seen wielding it too often.

Scythe Of Testament (The World God Only Knows)

The scythe of testament is a symbol of nobles. It is wielded by different people, including one of the main characters of the show, Haqua. The Scythe is similar to a double sided scythe, with three small blades on one side and one large blade on the other. The scythe also has the ability to light the blade on fire.

Crescent Rose is a High-Caliber Sniper-Scythe. This red and black scythe is large and shaped like a crescent moon. The scythe has a storage mode, a rifle mode, and a scythe mode.

This beautiful yet deadly scarlet weapon is wielded by Ruby Rose who is capable of using the scythe to the best of its abilities.

Hidan wields a scythe in the anime with three blades which he uses as both a short and long-ranged weapon by adding a rope to its end. This weapon’s triple blades make it all the more dangerous, and together with the wielder, Hidan, only trouble awaits their opponents.

Vassal Scythe (The Rising of The Shield Hero)

The Vassal Scythe is one of the eight Vassal weapons bestowed to the heroes from Glass’ World. This weapon’s current owner is L’Arc Berg, the current Scythe Hero. Additionally, this weapon can take in the souls of the enemy to become stronger.

Shikama Doji (Seraph of the End)

Shikama Doji is a demon who takes the form of a large Scythe which is used by Shinoa. This scythe can take different forms, one of them includes a torso of a volcano-like creature. It can also emit flames from its blade. Shinoa is also able to turn the scythe compact in the form of a key.

Soul is a form of Demon Scythe who later became a Death Scythe. He’s wielded by Maka Albarn who wishes to make a death’s weapon stronger than what her father had. In his death scythe, he takes a different form, similar to that of a whole crescent moon, like in the image below. Both forms he takes are deadly and immensely powerful.

These are all our favorite anime scythes. You can also check out our list of the coolest green-haired characters. For more anime content, stay tuned to Retrology.

List of Best Bleach Filler Arcs that you may skip (or...