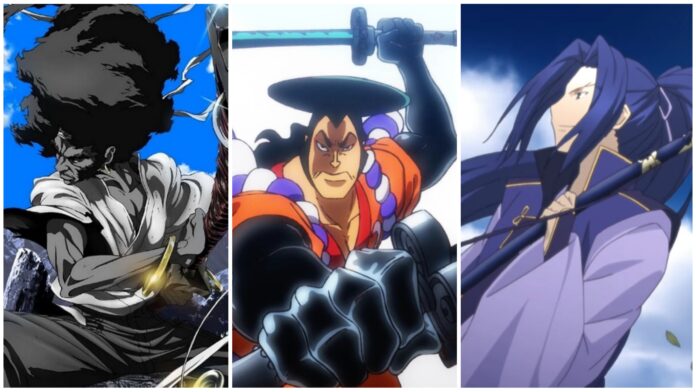 Kambei is one of the main characters in the show and was the first of the seven samurai. Kambei is wise and calm, yet carries the burden of all the battles he has fought. Although he does not feel emotions anymore, he’s quick to protect others. His strategies have defended his village from many threats.

Even though his real name is not known, he is called the “God of the Sword”. Mifune is a human and the bodyguard of Angela Leon. However, he is later blackmailed into working for Arachnophobia. He is somewhat reserved and, even after joining Arachnophobia, protects children from harm’s way.

Matabei is the bodyguard or Yukimura Sanada. She is a quiet and loyal person. Matabei is also very strong and is able to hold her own against strong oppenents. She also has a peculiarly strong sense of smell.

The main protagonist of the show, Afro is a samurai who seeks revenge on his father’s murderer. He was just a child when a man, by the name of Justice, cut off his father’s head in front of him. Now, Afro has become a cold-blooded killer, killing anyone who comes in the way of his revenge.

Irako is among the main characters of this show. Although blind, he is very skilled with his blade. Later in the series, he is able to overcome his blindness.

Next, one of the main characters of Samurai Champloo, Jin is a skilled samurai. He is one of Fuu’s bodyguards along with Mugen. He is always collected and cherishes his friends a lot. After killing his teacher in self-defense, Jin is constantly hunted by other students of his teacher.

Hitokiri Battosai is the name given to the primary protagonist of Rurouni Kenshin, Kenshin Himura. To redeem himself, Kenshin swears to never kill again. However, once the situation is out of control, Kenshin must fight to keep the peace in Japan. Humble, wise, yet strong, Kenshin is the depiction of a wandering samurai.

Known more commonly by Assassin in Fate/Stay Night and Unlimited Blade Works, Sasaki Kojirou is Caster‘s Servant. Sasaki Kojirou did not actually exist in the history of the Type-Moon universe. Yet, due to a Servant summoning another Servant, he was able to exist.

Oden was the leader of the legendary group of samurai, the Nine Red Scabbards. He later became a pirate, joining Whitebeard’s crew and even Gol D. Roger’s. After finding Joy Boy’s treasure, he returned home ready to become the Shogun of Wano Kuni after his father. However, he was executed by Kaidou and Orochi 20 years before the current storyline.

One of the main protagonists of the show alongside Dororo, Hyakkimaru is a wandering samurai or a ronin. After losing all his body parts as his father’s sacrifice when he was born, he was found by Jukai who gave him prosthetics and raised him. He sets out seeking revenge on his father and younger brother to reclaim his body parts.

Gintoki is the main character of the show Gintama. He is currently the founder of the Yoruzuya and a powerful swordsman, also called the “White demon” due to his strength and demonic appearance during the Joui War. Gintoki has a childish personality and is often shown as a coward, but he is willing to risk his life for the sake of others.

Although this is the end of the list of samurais in anime, there is one samurai in a manga who is too cool to miss.

Musashi is the main character of Vagabond, named after one of the most legendary swordsmen in Japanese history. After being abused by his father as a child, Musashi took on an aggressive demeanor. However, later on, he becomes a more kind-hearted and gentle person, to the point where killing others would hurt him too.

That concludes our list of samurais in anime. Now you can check out the coolest characters who wield the scythe. For more anime content stay tuned to Retrology.

Best Anime Openings of the 2000s

Vagabond final chapter that fans have been waiting for