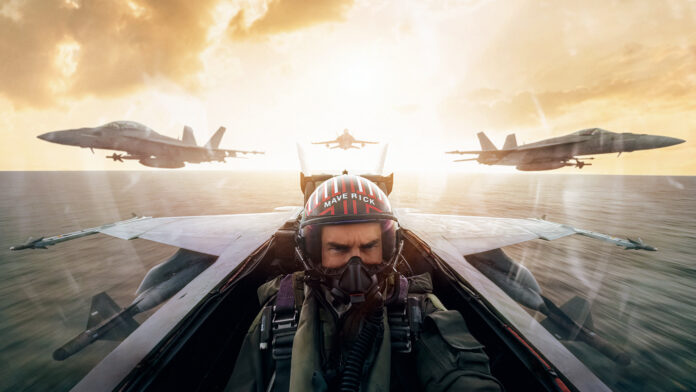 Released on 27th May 2022, Top Gun: Maverick was definitely one of the most awaited movies of May 2022. One can never go wrong when it comes to Tom Cruise and action, Joseph Kosinski’s sequel takes Top Gun to new heights, outperforming the original in practically every way. Top Gun: Maverick took a long time to arrive in theatres, but the 36-year wait was well worth it. The spectacular ending confirmed that Pete “Maverick” Mitchell (Tom Cruise) still has it and reaffirmed his standing as one of the best jet pilots the US Navy will ever see.

Even though the Top Gun franchise isn’t particularly complicated in terms of plot, the sequel Top Gun: Maverick does raise a few questions that deserve to be addressed. To have a deeper look here we have Top Gun Maverick ending explained in detail.

Contents
1) The Objective
2) Mission Executed (Everything that was planned and unplanned)
2.1) The Dogfight
2.2) Nostalgia
3) Reconcile of Maverick and Roaster
4) Can we expect Top Gun 3?

The ending of Top Gun: Maverick centers around a mission. Maverick had prepped the prior Top Gun graduates for the demolition of an underground nuclear facility in an unnamed enemy country. It was an impossible mission, the pilots will have to fly into a very narrow valley, only a few feet above the ground, to evade radar detection, pinpoint targeting precision, and a life-threatening ascent to escape hitting a mountain and blacking out because of g-force.

One group of planes will blow the crater open, while a second group will fire a missile into it from behind. The Top Gun pilots will also have to face the enemy’s technologically better 5th generation fighter jets in a duel.

However, after the death of Iceman, Maverick lost his protection from Admiral Tom Kazansky, and now Cyclone, who is not a fan of Maverick, took his place as Top Gun’s instructor. Cyclone informs the grads that he will be taking control and the entire plan will be changed. The pilots now fear that the new strategy will make them easy targets for the enemy.

While Cyclone is training the pilots, Maverick, on the other hand, stole a plane and flawlessly executed the simulation, demonstrating to the students that their difficult mission could be completed in 2 minutes and 15 seconds because “it’s not the plane, it’s the pilot.” Cyclone after being satisfied with Maverick appoints him to take control and select his team.

Given their comparable wild card flying styles, we were lead to believe that Hangman will be chosen to soar beside Maverick and it seems that roaster will be grounded. However, we see that Maverick is finally able to face his demons and chooses Payback, Bob, Phoenix, and Rooster to accompany him on the mission, putting an end to Rooster’s long-standing feud with his late father’s colleague.

Mission Executed (Everything that was planned and unplanned)

To create the opening, Maverick approached the 3-meter target and shot it on target. Dagger 2 picked up the pace and approached the target. Despite their laser malfunctioning, Rooster sight-checked the target and struck it, destroying the underground uranium complex. The pilots’ preparation paid off, and they successfully completed the climb of 9.5 g-force without colliding with the mountain.

When the adversary launched SAMs and scrambled fifth-generation jets to intercept Maverick’s squadron, the dogfight began. Every Navy F-18 was equipped with flares to deflect dangerous missiles, but Rooster ran out when he was pursued by an enemy jet. While attempting to shield Rooster with his own plane, Maverick was shot down. Although Pheonix/Bob and Payback/Fanboy returned to the aircraft ship, Cyclone refused to dispatch Hangman to save Maverick.

He assumed Maverick was dead and didn’t want to put any other pilots life at danger. Maverick is caught behind enemy lines, without a plane or a place to hide. It appears as if he’ll make the ultimate sacrifice — until BAM! Rooster has finally accepted the unconventional, defied orders, and returned to save Maverick.

The dogfight isn’t done yet, and Rooster is forced to abandon his plane as well. They try to reconcile while outrunning the enemies, but death eventually catches up with them once again. We know the remainder of the team has made it back to their ship safely. Maverick and Rooster are still in trouble and must find a way back to the ship on their own.

They decide to take an enemy fighter and use their unique skills to survive. The only plane they locate is an ancient F-14; nostalgia has resurfaced, and it sails our heroes into the sunset and to safety thanks to Hangman, who joins the mission just in time to redeem himself and save the day.

The battle between Hangman and Rooster concluded the same way it did between Iceman and Maverick at the end of Top Gun, with Maverick and Rooster reconciling at long last. In addition to the three Russian MiG fighters he shot down in Top Gun, Maverick becomes the first pilot to take down five enemy planes.

Reconcile of Maverick and Roaster

Rooster’s hatred for Maverick originated from the fact that his father, Goose, died on Maverick’s watch in 1986, but there was another cause as well. Rooster’s application to the Naval Academy was withdrawn by Maverick, costing the younger pilot four years of his career. What Rooster didn’t realize was that Maverick did it because his mother, Carole Bradshaw (Meg Ryan), didn’t want Rooster to follow in his father’s footsteps and become a pilot.

Carole’s desires were met, and Maverick accepted full responsibility from Rooster so that he wouldn’t have to blame his mother. This is something Maverick told Penny about, but not Rooster.

Rooster finally realized what his father saw in Maverick and his flying ability after they survived the ordeal of being shot down and flew their stolen F-14 back home. When Rooster was younger, Maverick sought to be an ersatz father figure to him, but by the end of Top Gun: Maverick, Bradley, and Pete are more like peers than Maverick and Goose were.

Rooster even chose to assist Maverick to refurbish his antique P-51 Mustang in his hangar, which is filled with fond memories of his father. This takes us to the end of Top Gun Maverick ending explained. Can we expect Top Gun 3? keep reading to know more about it.

Can we expect Top Gun 3?

Return of Tom Cruise as Pete “Maverick” In Top Gun: Maverick, Mitchell was left open. Possibility of Maverick’s heroic death at the end of Top Gun: Maverick did exist, but after Iceman’s death, it appeared doubtful that both of Top Gun’s remaining symbols would be killed off in the sequel.

One of the key reason why it took 36 years for Top Gun sequel to arrive is because Tom Cruise wanted to wait until the technology was ready to put his idea for breathtakingly realistic flying sequences with the actors really piloting combat jets into action. However, since the technology is now available, it may be more sensible to release a third Top Gun film sooner rather than later.

That is all about Top Gun: Maverick ending explained. To know about Who is Gorr the God Butcher in Thor: Love and Thunder? or for more entertainment, keep following Retrology.