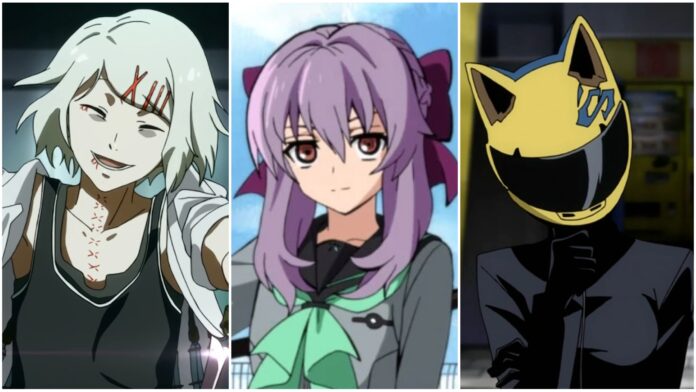 In action anime, creators don’t ever shy away from making characters with interesting weapons. Although swords or katanas are often thought to be the coolest, scythes aren’t that shabby themselves. Here we’re sharing our top 8 characters who wield the scythe in anime.

Juuzou or Rei Suzuya is one of the strongest members of CCG. He is a twisted character, to say the least. Once a normal kid, he became numb to the pain and feelings after being abused as a child.

He uses different weapons, and one of these is the 13’s Jason. A quinque in the form of a Scythe. It classifies as a Monster class weapon and has a gimmick that has not been shown in the anime.

Jack the Ripper is captain of the Green Preying Mantises, one of the nine squads responsible for the protection of Clover Kingdom. Named after the infamous serial killer, Jack was made to share quite a few traits with him. Nonetheless, Jack is a protagonist in the show.

He possesses Slash magic, which allows him to turn his hands into Scythe-like blades to cut everything in front of him.

Kite was a student of Ging Freecss, Gon’s father. He is a hunter and plays an important role in the Chimera Ant Arc of the series. Even though he seems cold and blunt at times, he’s a caring person.

Although he doesn’t prefer to use scythes, one of his nen abilities grants him a sharp and large scythe. Once deployed it can not leave until Kite attacks with it using its skill, Silent Waltz.

The leader of the Shinoa squad of the Moon Demon Company and a sergeant of the Japanese Imperial Demon Company. Shinoa is a rather strong character in the show and comes from a prestigious family. She’s composed and calm and cares deeply about her friends.

Her cursed gear contains the demon Shikama Doji, who takes the form of a large Scythe. Additionally, this scythe can take different forms, one of them includes a torso of a volcano-like creature. It can also emit flames from its blade.

He is the co-lieutenant of the 9th Division. As opposed to his appearance, Hisagi is calm and mature, maintaining a serious composure. He also prefers to avoid battles and fights and has a gloomy side sometimes shown.

Hisagi had stated he did not like the release of his Zanpakuto’s Shikai, which is similar to a scythe. He believes it to be similar to something meant to “reap life itself”. This weapon has two scythe blades coming out from each of them, one straight and one inverted.

Hidan is a member of the Akatsuki and an S-rank missing-nin. Before that he used to live in Yugakure. Hidan is disrespectful and sometimes acts insane, even though he claims to be religious. He takes pleasure in murdering people and believes that the shinobi are supposed to kill. However, he does show respect to people who show interest in the cult-like religion he follows.

Hidan wields a scythe in the anime with three blades which he uses as both a short and long-ranged weapon by adding a rope to its end.

Maka Albarn is the main protagonist of the show Soul Eater. She is a two-star meister at Death Weapon Meister academy.

She has partnered with Soul Eater, the demon scythe, to make a death’s weapon stronger than what her father had. Maka also wields other demon weapons that take the form of a scythe when partnered with her.

Celty is one of the main protagonists of the show Durarara!!. She is known as the headless rider and rides around Tokyo wearing a black suit with a yellow helmet on a black bike. In reality, she is an Irish Fairy called a Dullahan who came to Japan seeking her stolen head.

Celty is one of the strongest characters in the show. She brings out a large black scythe, which emerges from her shadows, to slash her enemies. As a weapon made out of shadow, it passes through her enemies, yet paralyzes them nonetheless.

That’s all for our favorite characters who wield the scythe in anime. You can also check out our list of the coolest green-haired anime characters. For more anime content, stay tuned to Retrology.

Some anime about Halloween to get you in mood for this...