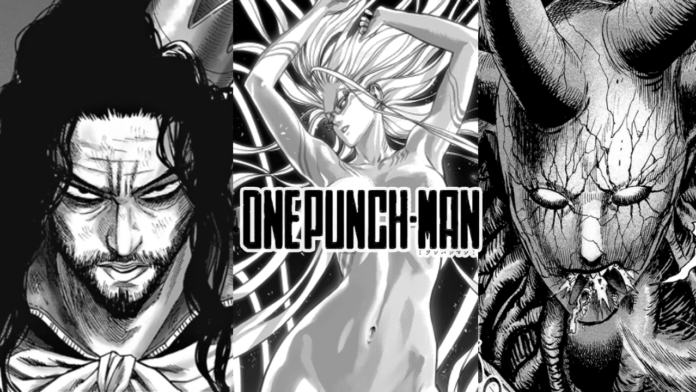 One Punch Man is a manga written by Yusuke Murata, with an anime adaption produced by Madhouse and J.C. Staff. It tells the story of a unique hero who is strong enough to defeat all his foes with one punch. Throughout the manga, we are introduced to numerous strong enemies. However, today we will rank the 7 Dragon level threat monsters we meet in the Monster Association Arc. This list contains spoilers from the manga.

Fuhrer Ugly is a high-ranked member of the Monster Association. he has proved to be stronger than many heroes with S-Class abilities, like Sweet Mask and even Tanktop Master. Furthermore, he gains the ability to manipulate Gums’ digestive fluids and escapes his stomach. This made Fuhrer Ugly even more powerful than before, he was even able to melt Superalloy Darkshine’s skin. Besides having immense physical capabilities, he is also very fast and has exceptional durability.

Homeless Emperor, although not good at close combat, possessed great destructive power. His speed and reflexes are nothing short of impressive, considering he has a human body. He is able to summon and control energy spheres that explode upon contact. Furthermore, these spheres can be charged to increase their size and the damage they carry out. There is no known limit to how many energy spheres he can create. He is even seen manifesting an innumerable amount of energy balls to pursue Tatsumaki.

Platinum Sperm is an extremely powerful monster and possesses an overwhelming aura. He was confident enough to challenge one of the most powerful heroes, King. Using the tentacle on his head, he injured and incapacitated multiple heroes in a single hit. What’s more, he was even capable of matching an evolved Garou in strength before being defeated. He is also one of the fastest monsters and was able to take most heroes down in the blink of an eye.

Sage Centipede is one of the largest monsters in the manga. Additionally, he even grew in size before appearing again, increasing his speed and making him even more powerful. There are only four heroes capable of defeating him: Tatsumaki, Metal Knight, King (Saitama), and Blast. He has leveled an entire city just by passing through it. Besides that, he is capable of regenerating from extreme amounts of damage.

Evil Natural Water, after merging with the ocean, becomes more powerful and larger in size, making it one of the largest monsters. It is impossible to deal physical damage to him as his body is of liquid. He has great control over his form and has the ability to absorb any liquids he comes in contact with. He is seen cooperating with other aquatic monsters which could be launched from his body. To boot, he is also able to fire high-speed jets of water at his opponents.

Orochi is the leader of the Monster Association and is claimed to be the strongest monster on Earth. He can stretch and deform his physical shape. Orochi’s main ability is to change the shape of his body at will, revealing his “released form.” he can generate Monster Cells with his body, allowing him to create as many monsters as he wants. Moreover, he has the ability to breathe fire from his mouth as well. This fire is strong enough to melt and destroy the stone environment surrounding him. In addition, he can project huge blasts of energy, even sucking energy from the earth’s core for a larger attack.

Orochi uses his absorption ability to regenerate and absorb Psykos and they merge into one huge monster with tentacles. They managed to injure Tatsumaki in this state, proving to be stronger than her. They are able to unleash a widespread energy attack, their attacks can even create tsunamis over the Earth’s hemisphere. Apart from that, the fusion can manipulate gravity and also fly at great speeds after turning into a jet. Along with that, Orochi’s ability to shapeshift can make their fingers into spears. They can discharge electric shocks with these spears to stun enemies, as seen with Tatsumaki.

These are the top 7 Dragon Level threat monsters from the Monsters Association. Previously, we covered the list of all characters that have defeated Garou, so do check out that as well. For more One Punch Man-related content, stay tuned to Retrology.