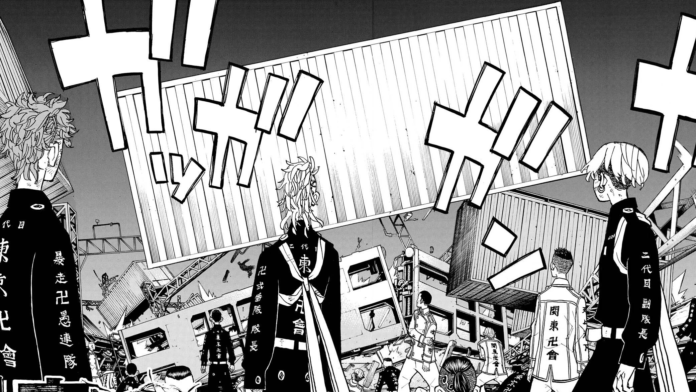 Tokyo Revengers is a manga written by Ken Wakui and adapted into an anime by the same name. The story follows Takemitchi, living a miserable life, whose ex-girlfriend is killed by the notorious Tokyo Manji Gang. After being pushed in front of a train, he finds himself 12 years in the past when he was still dating her. He makes up his mind to join the Tokyo Manji and prevent her death at all costs. We will be discussing the latest chapter of Tokyo Revengers, Chapter 254, here. There will be spoilers, thus, it is advised not to read if you aren’t caught up with the manga.

The fight between Toman and Kanto Manji is still going on, with Bonten having the upper hand. In the previous chapter, Mikey had knocked Pah-chin out cold. Following that, he was also able to beat Angry, Smiley, and Peh-yan with ease.

The chapter ended with Takemitchi seeing a vision. This vision showed Mitsuya, Chifuyu, Hakkai, along with Mikey’s other opponents possibly dead after a train runs over them. This train was operated by Sanzu.

It is clear that Kakucho is against the murder of other gang members. Although he tries to stop Takemitchi from leaving their fight, after seeing his will to not let anyone die he follows him. We know that Kakucho does not know that Takemitchi came from the future nor that he can see visions, but he still trusts him.

The chapter ends with Takemitchi and Kakucho calling a truce to fight against Sanzu and stop him from killing anyone. We can expect the next chapter to have a showdown between them. However, since Sanzu is still on the train, it’s hard to see how the next chapter will unfold and whether he will be willing to fight them or not.

That’s all for Tokyo Revengers Chapter 254, you can also check out our Kaguya-sama’s latest chapter’s discussion. For more anime content, stay tuned to Retrology.