The Most Ethereal Komi-San Fan Art 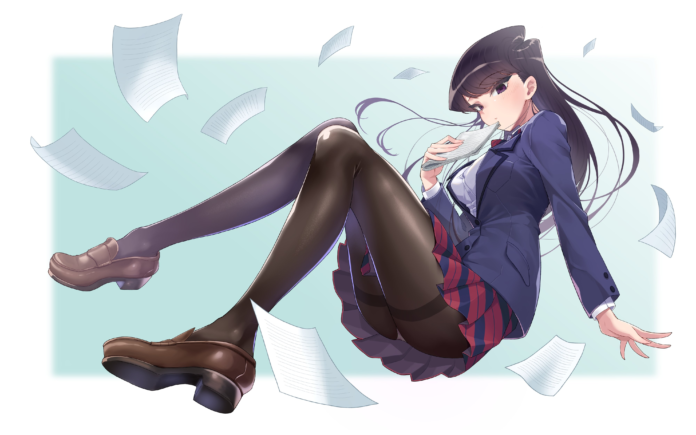 Komi-san Can’t Communicate is a Comedy Slice-of-Life anime based on the manga by Tomohito Oda. The story follows Shouko Komi, a beautiful and graceful high school student. Thus, she quickly becomes the most popular girl in her prestigious school. However, Komi has a communication disorder and struggles to speak to anyone. After Tadano Hitohito figures out that Komi has trouble communicating with others, they become friends. Thus as Komi’s first friend, Tadano decides to help Komi achieve her goal of making a hundred friends. Here, we have collected some Komi fan art for you which shows off her beauty in different styles.

The first one is art made by the Mangaka, Tomohito Oda, commemorating the final episode of the first season. It shows her in a maid outfit with glasses. Meanwhile, the second shows her in a kimono in front of a shrine gate.

These two artists used their own beautiful art styles to make the fan art. The art on the left is more realistic, showing Komi holding a book on how to make friends. Moreover, the one on the right has an adorable cartoon style with Komi holding her flip phone.

These fan arts also showcase Komi in amazing unique styles. The right one shows a pink komi in casual clothes, while the one on the left uses realism.

These two pieces show Komi in her school uniform. The first one shows papers floating around her, as Komi communicates with Tadano by writing what she wishes to say. Also, the second one shows her in front of a window with sakura petals falling.

Finally, this fan art was made by the Mangaka of the Shounen show My Hero Academia, Horikoshi Kohei.

This was some of our favorite Komi fan art, be sure to check out all the amazing artists and support their work! Moreover, You can also check out our Loid Forger, Anya Forger, Yuta Okkotsu, or Luffy Gear 5 fanart collection. For more anime content, stay tuned to Retrology.