How To Get SSR RELIC Colossus Arm In Tower Of Fantasy 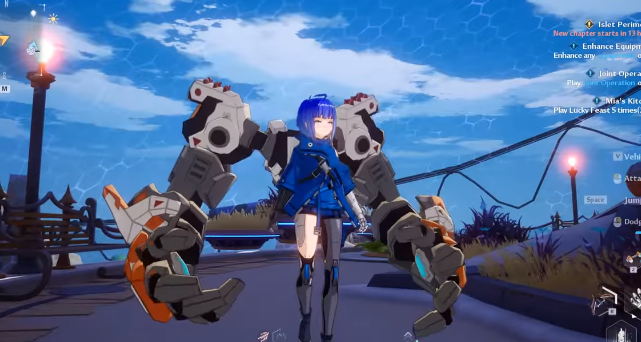 Like any other game, in Tower of Fantasy, you must act as a hero. You’ll need not just effective weapons or greater Simulacrum to do this, but you’ll also need to recruit the usage of Relics. The SSR Relic Colossus Arm is one of the most powerful weapons in Tower of Fantasy.

To make things easier, this guide will walk you through the criteria and methods to obtain the SSR Relic Colossus Arm in Tower of Fantasy.

How To Get SSR RELIC Colossus Arm

First, make an Iced Strawberry Soda since you’ll need it later. 2 Strawberries, 2 Honey, and 11 Carbonated Water are required for preparation.

Before proceeding, obtain two tool sets, as you will use them later. To get tool sets, buy two “Fine Gifts” from either the Crystal Dust Store or the Points Store. Money made of crystal dust is received every time you expend vitality as for the point store you obtain those by accomplishing any of the daily practice tasks from the missions menu.

A tool set is a present that may be given to a Simulacra to strengthen the relationship; it can also be used to fix damaged machines encountered in this quest line. You may utilize the Fine gift from your backup. Once purchased, just choose the Toolset from the other available options, making sure to get two pieces of Toolset as you will need them.

To begin the side quest, speak with a Hyena Guard found on a Hyena oil rig on the west side of Signal Station Ruins. To get there, use the Jetboard to complete the path faster and easily.

After starting the talk, choose the first dialogue option, and the quest should begin.

Return to Banges Dock and look for Post Guard Lozwall. He will be near the teleporter and will offer you a means to enter the first oil rig. Return to the Hyena Guard and select the third dialogue option this time. This will provide you access to the oil rig.

Now go to the second floor and look for the Hyena Classified Document, which contains the information you need to enter the second Hyena oil rig.

The second Hyena oil rig is located on Rain Caller Island’s western side. You may use the Jetboard to reach there or fly over the water by using the Jetpack.

Here, you will encounter another Hyena guard here; speak with him and respond to all of the dialogue options listed below:

When you arrive on the rig, look for Morgley and offer him the Iced Strawberry Soda. Talk to him again and he will give you Console Components, which you will be needing later.

Climb into the tower and use the toolsets to fix the three shattered panels. You can repair these three panels with 2 toolsets. Then, use the control panel to activate the device.

A blue pillar of light should be seen towards the center of Navia Bay, leading to a floating platform above. Proceed towards the bottom of the light and use the teleporter to access the ecological park.
The Colossus Arm should be seen on the top, amid other standard supply pods; activate the unique pod to receive the SSR relic Colossus Arm.

Players will gain the following status upgrades with the acquisition of the SSR Colossus Arm star relic. Here’s a description of Colossus Arm’s star improvement in Tower of Fantasy: