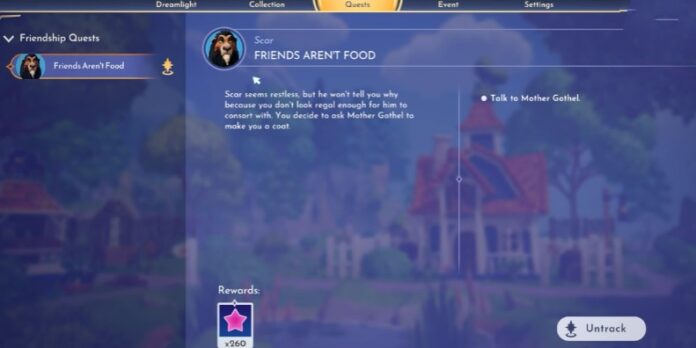 “Friends Aren’t Food” is a Disney Dreamlight Valley Friendship Quest involving Scar that requires players producing a coat to impress the terrible lion. Let’s get into a detailed guide on how to complete this quest.

To access this quest, players must first complete Remy the rat chef’s quest and achieve Friendship Level 2 with Scar. Completing “Friends Aren’t Food” grants players 260 Friendship XP, which isn’t much when compared to most late-game Friendship Quests. Nonetheless, it is a reasonable sum that should offer another level with Scar, allowing players to improve the Villager’s working Skill and his special reward path in Disney Dreamlight Valley.

After receiving the new mission from Scar, you must speak with Mother Gothel about a coat fit for a king. Needless to say but you’ll have to unlock Mother Gothel before going for this quest.

Here are the things you’ll need for the cloak.

Once you’ve gathered everything, return to Mother Gothel, who will offer you the cloak in exchange. Put on your coat and approach Scar.

Once you go back to scar, he would greet you this time with a different agenda. He is hungry now and couldn’t care less about the coat. Go to Remy’s kitchen now to make something for him.

Go see Remy, who recommends some tasty sushi items for Scar to eat. Remy will offer you the recipes if you don’t already have them. You can access them through your inventory.

You’ll need the following ingredients to make this dish. Make sure to have two of each item mentioned below as you have to make two batches of each.

You’ll need the following ingredients to make this dish. Make sure to have two of each item mentioned below as you have to make two batches of each.

After the preparation of these two meals, players must accompany Remy as he brings the two plates to Scar. Despite his criticism of the food, Scar allows the sushi to settle him down and stops devouring the Dreamlight Valley people for the time being. The “Friends Aren’t Meal” Friendship Quest in Disney Dreamlight Valley will be completed if Scar receives the food.