Best Demon Slayer quotes to give you a boost of motivation 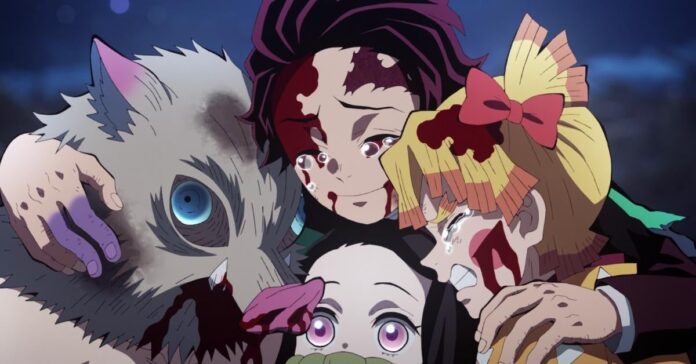 Demon Slayer is a manga written by Koyoharu Gotouge and adapted into an anime by Ufotable. The show has gained a large fanbase over a rather small period cause of the fluid animation and exciting story. Here we have collected our favorite Demon Slayer quotes to help you up when you feel down.

The story follows Tanjirou Kamado, whose family was impoverished, yet lived a peaceful life. On his way back from selling some charcoal, he is forced to take shelter for the night in the house of a strange man. When he arrives home the next day, he finds his family slaughtered.

The only survivor was his sister, Nezuko, who had turned into a bloodthirsty demon. As he awakes the last of his sister’s humanity, he vows to avenge his family and joins the Demon Slayer Corps to protect his sister.

No choice but to go on living

“No matter how many people you may lose, you have no choice but to go on living. No matter how devastating, the blows may be.”

Tanjirou Kamado said this to push himself past his limits and achieve victory in his battle.

Don’t ever give up

“Don’t ever give up. Even if it’s painful, even if it’s agonizing, don’t try to take the easy way out.”

Although Zenitsu often seems like a wimp, he is resilient and bold when it comes down to it. For example, the time he took a beating from Inosuke but refused to let him open Tanjirou’s box with Nezuko inside.

The weak have no rights

“The weak have no rights or choices. Their only fate is to be relentlessly crushed by the strong!”

This seems cold at first, but Tomioka Giyuu said this to motivate them to get stronger, perhaps by instilling slight fear.

Hone it to the utmost limit

“If you can only do one thing, hone it to perfection. Hone it to the utmost limit.”

Zenitsu’s teacher gave him a lot of wise advice. This one is similar to the famous saying “Jack of all trades, master of none”. Rather than learning one thing, learn a single thing and do it the best.

“Go ahead and live with your head held high. No matter how devastated you may be by your own weakness or uselessness, set your heart ablaze. Grit your teeth and look straight ahead.”

The heart-wrenching words by Rengoku Kyojuro. This moment sparked a fire in the hearts of all the watchers and is definitely one of the most iconic lines in the show.

“However, life can be as fickle as the weather. Constantly changing, never stagnating. It won’t always stay sunny, but snowfall doesn’t last forever either. And whenever happiness meets its end, it always carries the smell of blood.”

Rather simple but terrifying words by Tanjirou. All good things must end, but when happiness ends, it’s caused by bloodshed.

“Those who regretted their own actions. I would never trample over them. Because demons were once human, too. Just like me, they were human, too.”

For someone whose entire family was killed by demons, besides his sister, Tanjirou shows a lot of sympathy for demons. He believes that if they truly understand the impact of their actions and don’t take the same path again, they deserve respect just like humans do.

That’s all for the best Demon Slayer quotes. Furthermore, you can read the best Pain quotes in Naruto. For more anime content, stay tuned to Retrology.