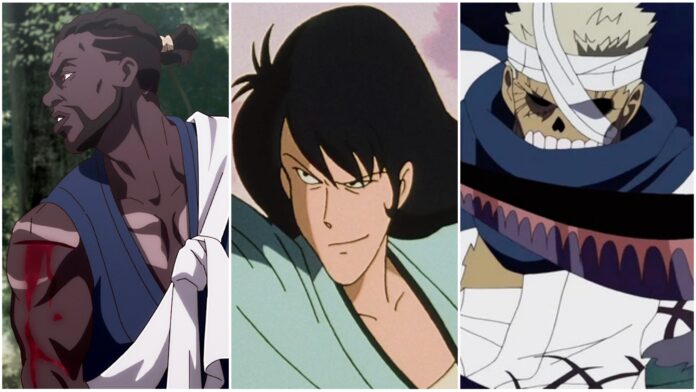 Samurai are warriors in Japanese history. In anime, these people are often laid-back characters, who are also very strong and serious when faced with an enemy. In this second part of the best samurais in anime, we’ll be covering some of the coolest samurai.

Ishikawa is the descendant of the historic ninja, Ishikawa Goemon. He himself is a samurai, usually reserved and compassionate. He is also very confident in his abilities as a samurai and trains to overcome any weaknesses.

Manji (Blade of the Immortal)

He is one of the protagonists of the anime, Blade of the Immortal. He’s known to have killed a hundred men and carries with him twelve swords. His name comes from the scar on his face which is like a manji. Although over 100 years old, he is always laid-back on his journey to get rid of the curse of immortality laid upon him.

Okamoto desired to be Shimada Kambei’s pupil and keeps trying to get stronger for Kambei to accept him. He also vows to protect Kirara, whom he loved. Moreover, he gains great physical and emotional strength towards the end.

Fujiki is called a demon and is one of the strongest swordsmen in Kakegawa. He is often included in the three tigers or the three demons. He is reserved, focused, and loyal to great extents. Although he loses an arm, he trains himself more to make sure the loss doesn’t make him weak.

Although first a video game character, he was the main character once this video game was adapted into an anime. Named after the famous samurai in Japanese history, he fights to help his clan unify Japan.

Ryuma was a legendary samurai from Wano Kuni. He was called “Sword God” and had once even killed a dragon. Ryuma was confident and ready to go against anyone looking for a fight. Long after his death, his corpse was stolen by Gecko Moria to turn him into a zombie who served him.

An elite samurai, also known as the “Hand of God” or “Divine Hand”. His strength is unparalleled, possibly being the strongest character in the series. Although he may seem calm and kind, he’s rather manipulative and cold. He goes into retirement after not finding anyone worth fighting.

She is a master samurai, named after the legendary samurai Yagyu Jubei Mitsuyoshi. She has a cheery personality and is often childish. But on the other hand, she can be very serious and scary once she transforms.

The main character of the show named after him. In Japanese history, Yasuke was from African origins and served the Japanese daimyō Oda Nobunaga. Yasuke is a kind man and has put his life in danger to protect a child. He is also loyal and even killed the person he loved after finding out she was a spy.

In this list once more, we think there’s a character from a manga we just can’t miss the opportunity to add.

Historically, Kojiro Sasaki was a legendary samurai. However, in the manga, there is no mention of Kojiro being a samurai, he is just referred to as a “swordsman”. He’s another one of the main protagonists of Vagabond and is like a rival to Musashi. He is childish and playful but also likes dueling others.

That concludes our list of samurais in anime. Now you can check out the first part of this list for some more samurais in anime who are loved by fans. For more anime content stay tuned to Retrology.