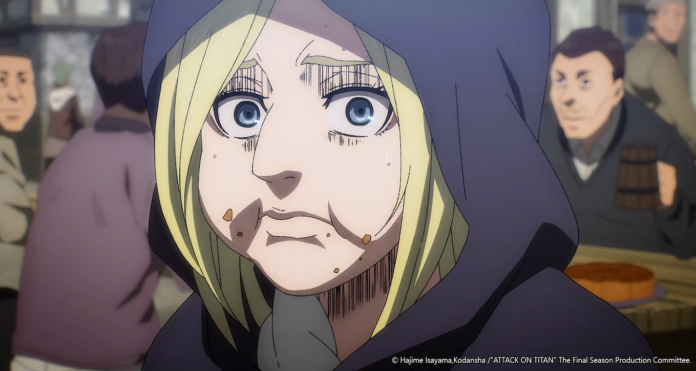 Attack on Titan Final Season Part 2 is in full swing and we are loving it. So far, the fans have been given multiple jaw-dropping moments along with some strange scenes as well like Yelena’s face moment and that Goth Mikasa Easter Egg. In the latest Season 4 Episode 24, Armin and his friends finally reunited with the Female Titan holder, Annie Leonhart after so many years. However, we have a couple of issues with Annie and Armin reunion scene.

I remember when I first read this scene in the manga how disappointed I was. The reason for that was that it felt unnatural and forced. What a coincidence it could be that of all the tables, Armin and Annie sit on the same one, right beside each other, at the same time. Furthermore, the fact that Armin brought up Annie’s hardening only when she was sitting beside him was also something that felt too unreal. This whole sequence gave me the feeling that Isayama wanted to save time and wasn’t that much concerned that how appropriate or dramatic the reunion should be, therefore, just brought Annie and Armin back together “by chance” in one simple meal break.

It is understandable that not every reunion between main characters has to be dramatic but at the same time, it also shouldn’t feel rushed, disconnected, or something totally coincidental. I have huge respect for Hajime Isayama, but this just came across to me as lazy writing.

The second major problem was Connie’s reaction. The last time Annie faced her teammates, it was total chaos. First, Annie’s betrayal was proved, then in the battle with Eren, lives got lost. Not just that but the Female Titan was also responsible for killing Levi’s squad along with many other Survey Corps members. Most importantly, she was part of the mission in which the Wall Maria was destroyed and Connie’s mother was transformed into a titan. But all of this was forgotten as Connie accepted Annie’s comeback with laughter and joked about her way of eating. It just didn’t make sense.

Connie had just seen his mother in a disabled titan form and a few moments ago, he was quite in rage. But when he saw Annie, strangely, there was no sign of anger and mistrust. In fact, his reaction came off as something welcoming and friendly to her former teammate which is not really that justifiable – at least on the first encounter with an enemy after years. Yet again, this felt too out of place.

Anyways, as I have read the manga, I am aware that the next episode is going to be well-written and interesting as we will get to see some serious talk happening between friends and foes regarding their past encounters and future relationship. So, that’s all for the complaints on Annie and Armin reunion scene.

What are your thoughts regarding this scene? Let us know in the comments below. For more content on anime and manga, keep following Retrology.

Finally, a new Fatal Fury/Garou game is on its way, SNK...