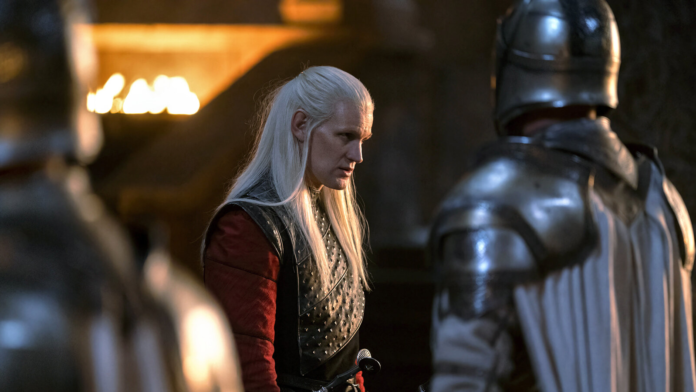 A fantasy show made as a prequel to the loved Game of Thrones, called House of the Dragon, has been widely popular nowadays. The series is based in part on the book Fire & Blood. It is set roughly 200 years before the events of Game of Thrones, 172 years before the birth of Daenerys Targaryen, and 100 years after the Targaryen Conquest. The series includes an ensemble cast and many of them have caught the audience’s attention Prince Daemon, played by Matt Smith, is one of them.

The younger son of Prince Baelon Targaryen and the brother of King Viserys I Targaryen, Prince Daemon Targaryen belongs to House Targaryen. He is the rider of dragon Caraxes, an older dragon known as the Blood Wyrm.

He uses Dark Sister, the Valyrian steel blade owned by his grandfather’s great-aunt Visenya Targaryen. Daemon is believed to be the most skilled combatant of his era. Despite his remarkable strategic planning, Daemon lacks the stability and self-control of his older brother.

With basics now known about the Prince, let’s move on to the fanart of Daemon Targaryen that portrays the power and wrath he has.

The art is carefully crafted by @AFinnstark on Twitter. She showcased not only Daemon but also his Dragon Caraxes. The art makes Daemon look like he’s floating on the cloud, ready to ascend and fight with his dragon at his side. Also, the size of the dragon is pretty accurate, making it true to its origin.

If we talk about the art style, it’s detailed with highlights and shadows. The slight smoky overlay gives it an “old” look which goes well with the character. Also, the focus on one color, Red, in this case, makes the color pop out more among the other grayscale scenario.

Overall it’s a good Daemon Targaryen fanart and considering the effort and time put into it, a remarkable job by the artist. Do visit her profile and praise her efforts, as she has many other pieces to blow your mind.

If you like to appreciate art and want to see more fanart, look at our Fanart section and choose the one you want.