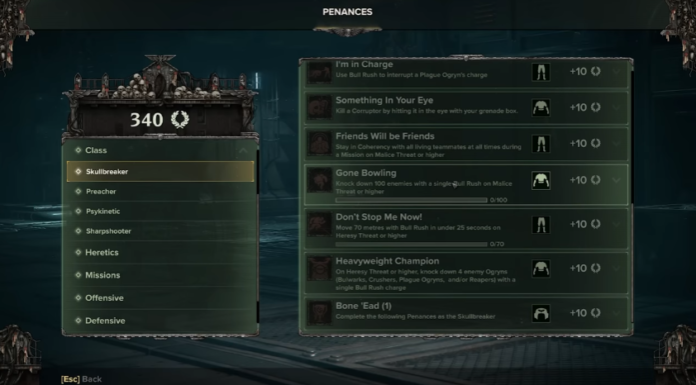 Warhammer 40K: Darktide consists of many new and interesting ways to keep you engaged whether it’s the basic making of build, feats, or Penance. Penance includes tasks that involve killing a certain number of opponents listed by the game itself. One such penance for the Ogryn is considered harder than the rest known as Heavyweight Champion Penance in Warhammer 40K: Darktide. To help you with it, this guide will help you complete it.

This task can be found in the Penance section of Skullbreaker. Here’s how this task is described in-game:

How to complete the Heavyweight Champion Penance

This penance requires you to just use one Bull Rush on difficulty level four, Heresy, or above to strike four separate Ogryn-level attackers. The Reaper, Crusher, Bulwark, and Plague Ogryn are all Ogryn-level foes.

Before undertaking this challenge, your Ogryn must be level 30. This is because the task is very hard if you don’t have the level 30 accomplishment Unstoppable because this will help you to keep charging if you’re charging through Ogryn and armored targets. It also doubles the Bull Rush range and makes it uninterruptible. You could do that without it, but you’d have to be really lucky for the opponents to be right close to one other.

It is suggested that you activate the Special Condition Endless Horde. If you’re on endless horde, you’ll be dealing with a lot of opponents; an Ogryn, two or three Reaper spawns, and one or two Crushers almost all the time.

This is challenging, but it makes the spawn rates faster, especially Elite opponents, which will greatly aid in obtaining sufficient Ogryn-level adversaries. This will make getting a window for the task, much alone pulling it off, extremely tough. As a result, we recommend having as sophisticated a loadout as possible, as well as teammates with whom you can interact.

Almost always, you’ll be dealing with two or three Reaper spawns and one or two Crushers. Bulwarks generally spawn with another Crusher or a bulwark, and a Reaper usually spawns with another Reaper, thus those items are good to stack up together.

Seeing four distinct sorts of adversaries is challenging enough, but bringing them close enough to Bull Rush all of them is even more difficult. You can try to unite them and then utilize your bull charge at the correct time. It’ll also be good to have the Battle Maul and Slab Shield weapons since their special action allows you to concentrate adversaries in one location for a better chance of completion.

And that’s all you’ll need to know about Heavyweight Champion Penance in Warhammer 40K: Darktide. For more similar guides, do check out our site Retrology.

Warhammer 40K: Darktide – How to complete the Don’t Stop Me...

Guide to Complete the Deadeye Penance in Warhammer 40K: Darktide