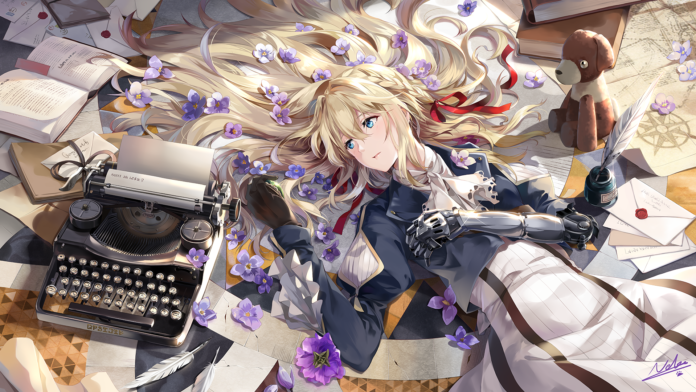 Violet Evergarden is an anime series based on a light novel of the same name. The short anime series went widely popular for its unique idea and captivating animation style. This is a story of a soldier trained to be a killing machine who after the war lands a job as the Auto Memory Doll, and learns about emotions. Along with the unique storyline, the writing, by Kana Akatsuki, was also the best part about it. To prove it has one of the best writings, here are some Violet Evergarden Quotes to convince you.

Contents
1) Main Concept of the Story
2) Who has the right to promises?
3) Explanation of the Burning quote by Violet (See above)
4) Just “Living” is Frustrating
5) Gift of Identity
6) Heart vs Mind
7) Different Interpretations
8) Regret is Stronger, indeed
9) Everything is Temporary
10) Short but Meaningful

Main Concept of the Story

“I want to know what ‘I Love You’ means…” -Violet Evergarden

Even if you haven’t watched Violet Evergarden, you very well may know about this quote. This is basically upon which the whole story was constructed. Taking the concept of war-trained human, their incapability to understand basic emotions and we follow this human on the journey to understand these emotions.

Who has the right to promises?

“Do I have any right after I killed so many people as a weapon? I must have prevented them from keeping promises of their own! Promises they made to loved ones of their own! Everything I’ve done so far has sparked a flame that is now burning me up.” -Violet Evergarden

A complex way of explaining the emotion of “burning up” is regret. It’s the regret that burns us up after the realize our wrongdoings.

Explanation of the Burning quote by Violet (See above)

“You’re going to learn a lot of things, But it might be easier to keep living if you didn’t learn them if you didn’t know them. You don’t realize your body is on fire and burning up because of the things you did. You’ll understand one day. And then you’ll realize for the first time that you have many burns.” -Claudia Hodgins

This quote was a reply to the famous burning quote by Violet. The reply was given by Claudia Hodgins, who wanted to explain her feeling for her. He told her to accept the fact that she made mistakes and everyone does that and that’s how you rise.

It’s frustrating to live without a goal but it’s also exhausting to live a life you don’t want to. So sometimes you need to let life make decisions for you and just see if they are what you want.

“You won’t be a tool, but a person worthy of that name.” -Gilbert Bougainvillea

The first time Violet was given an identity. She was originally going to be trained under a code as a human killing machine. But Gilbert gave her a name giving her an identity; making her human.

“The worst battle is between what you know, and what you feel” -Violet Evergarden

The famous battle of feeling and logic has always been a good argument topic. Neither seems to win as both are right in their way.

“Words can have different interpretations. What one says isn’t the whole truth.” -Cattleya Baudelaire

There is sometimes an underlying meaning to some things we read or hear. Not all are what they seem to mean literally. so look deeply and try to look for that hidden meaning.

“Dead people receive more flowers than living ones because regret is stronger than gratitude.” -Violet Evergarden

Bitter truth. This is a fact at this point judging by the amount of time it has been spoken by different characters across the entertainment industry.

“Everything is temporary. Emotion, thoughts, people, and scenery. Do not become attached, just flow with it.” -Violet Evergarden

People who go with the flow live an easier life while those who get attached, are stuck in one place. So it’s better to accept the progression and move along.

“A letter can sometimes be short and sweet, and still, express important feelings.” -Luculia Marlborough

It all depends on how you convey your message as it doesn’t always have to be long, but concise and meaningful.

We’ve also covered one of the most popular anime series’ Demon Slayer quotes. Do check them out if you want to read the handpicked best ones from the series.

Violet Evergarden cosplay that may have came out of the anime...