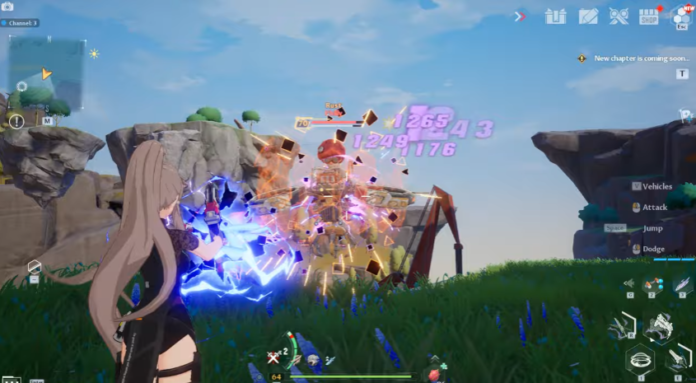 On September 15th, 2022, Tower of Fantasy received its significant version 1.5 update. The latest 1.5 changes, as well as the future 2.0 version, have been announced quickly by the developers. Wanderers will be able to build on their own Home System and more now that the new Artificial Island System is available for them to experience.

Contents
1) Who is Philly?
2) Location of Philly
3) How to Defeat Philly?
4) The Reward for Defeating Philly

Philly is a level-70 helicopter riding man with massive DPS who can easily shred you if your defense is low. It is a red-haired Hyena on a plane. It flies at you and fires an orange orb whenever you are within its range.

Philly is present to the south of Ground Zero. It can be found hovering over the location denoted by the purple spot in the image below. Philly is one of the new bosses introduced in the Artificial Island update. It stays up in the air most of the time but can come down sometimes to attack. Also, you need to spot it to start the fight, or else you can miss it.

Philly, located around Base Zero, will be observed flying about the grass with approximate coordinates 148.3, and 161.0 and searching the area extensively. Make sure to look up while searching so you can catch sight of it.

How to Defeat Philly?

This boss in particular is difficult because the target is in the air and may move quickly. Because he flies around, striking him with aerial attacks may deplete your stamina and occasionally miss. The key thing you need to do is play with a long-ranged strong player or have at least one long-ranged weapon equipped when battling Philly that can defeat it from a distance.

Defeating him can be difficult, especially if you don’t have a ranged weapon, so keep that in mind. Also, try to keep him away from the cliff because then it’s hard for you to attack him while he gets the advantage of flying far away to throw your balance off.

The Reward for Defeating Philly

After defeating it, you will receive the “Rust Philly” award. It drops some materials which can be used to make specific recipes in the game. You will also be rewarded with some EXP.