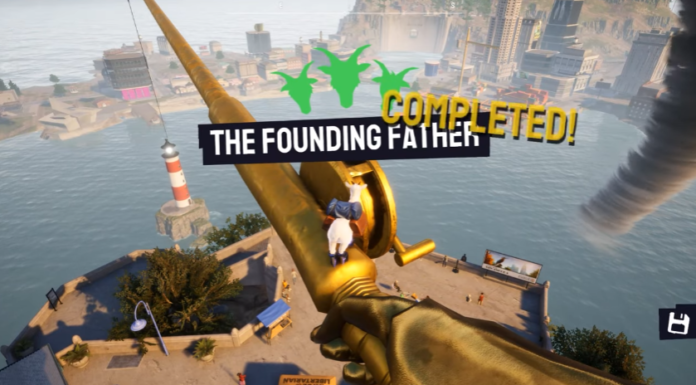 Goat Simulator 3 is a new third-person sandbox adventure story game in which you can do everything a goat can do. This includes headbutting randomly, being clumsy and triple-jump your way around the massive island of San Angora, which is the area for this game.

Along with that, the Goat Simulator 3 keeps you busy with numerous quests, storylines, collectibles, and some achievements. While some require you to work a little, there are some tasks that require the bare minimum from you. One of the easy achievements is The Founding Father Achievement in Goat Simulator 3 and this guide will walk you through the process of it.

Location of statue of Founding Father

Before everything else, you need to know where you can start and complete this task. The quest’s location is on the Libertarian Island, which has two bridges you can use to go there. The quest won’t start unless you reach the statue present in the middle there. You can see the location on the picture map given below.

Process of The Founding Father Achievement

And that is how you can complete The Founding Father Achievement in Goat Simulator 3. If you fall off the statue, you can start over easily with the fan present, so it’s not really an issue. If you need help with guides related to this game, do check out the guides section.

Guide to every pointy foods factory trinkets in Goat Simulator 3