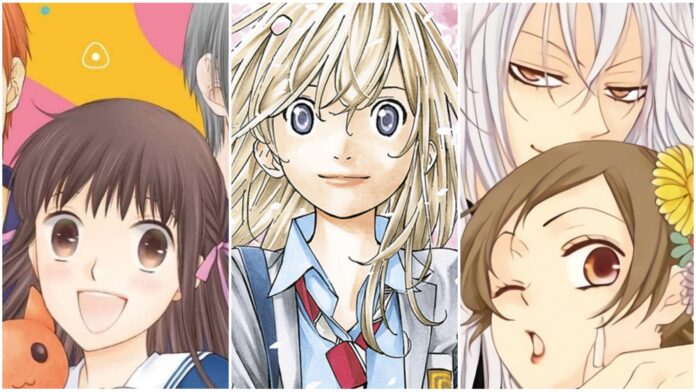 Romance is one of the most famous anime and manga genres. We have compiled a list of the best romance manga that surely are wholesome enough to spread a smile across your face. Although these mangas won’t feature leads with the most famous personality type, which is tsundere, they are still just as lovable.

The story follows Moritaka Mashiro, a talented artist, and Akito Takagi, an aspiring writer. Akito tries convincing Mashiro to work on a manga together with him. Mashiro, although hesitant at first, is convinced once he finds out his crush wishes to become a voice actress.

Nana Komatsu and Nana Osaki are two girls with the same name, completely different personalities, both struggling with their love lives. As fate would have it, they end up sharing the same apartment and get to support each other through their problems.

Nanami Momozono’s father escapes town to evade his debt which results in her being evicted. She stumbles upon a man on a tree, afraid to come down because of a dog. After scaring the dog away, she tries to let the man allow her to stay with him for a while. Surprisingly, the man hands her his house and leaves, but this house is actually a shrine. Now she must complete her duties as a Land God with a hot-headed fox familiar by her side.

Your Lie in April

Kousei Arima used to be a child prodigy for playing the piano. However, this was just due to his unfairly strict mother, and after her death, he left the piano behind until he met Kaori. Kaori is a violinist and gets him to perform again as her accompanist.

Kyouko Hori and Izumi Miyamura are two high school students who happen to cross paths. These two are supposedly polar opposites, but they have one thing they have in common. They have a completely different side of themselves that they don’t let their friends see.

After losing her mother, Tohru Honda has nowhere left to go and puts up a tent in the woods where she stays until she is found by the Sohmas. She moves in with them and discovers a secret the family hides. They turn into animals from the Chinese Zodiac once hugged by someone from the other gender. Tohru goes deeper into this family and plans on breaking this centuries-long curse once and for all.

Yona is the sole princess of the kingdom of Kouka. After her cousin, who she was in love with, plans a coup and kills her father, she must escape the palace along with her bodyguard, Son Hak. Banished from her country, she meets a priest who recognizes her striking resemblance with the crimson dragon and tells her to look for the four legendary dragon warriors. She sets out to look for them, in hopes of getting her kingdom back with their help.

These are some of the best romance manga, in our opinion, which you’ll definitely find entertaining. For more anime content, stay tuned to Retrology.