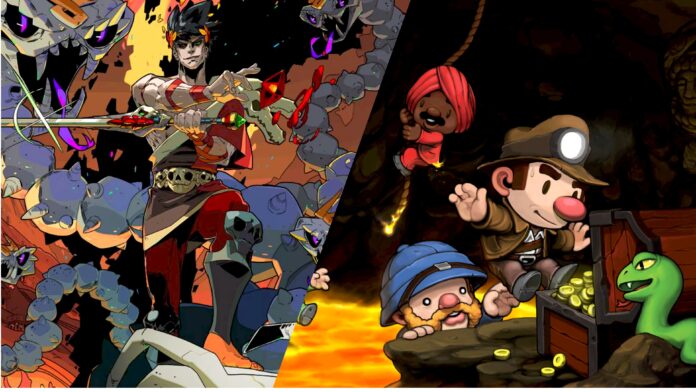 As game developers alter established formulae and think of fresh methods for players to interact with them, new terminology is inevitably formed for games. Roguelike is one of these genres, which first appeared as a new type of game. However, people continue to confuse it with its sister term, Roguelite. Let’s examine these subjects in depth to determine how they compare and contrast; roguelike vs roguelite genres.

Contents
1) History and Origin of the word Roguelike
2) What is Roguelike?
3) What is Roguelite?
4) Differences between Roguelike and Roguelite
4.1) Death is Fatal
4.2) Same Environment
4.3) Less Work, More Rewards
4.4) Possibility of Adventures
4.5) Story Progression
4.6) Not so Turn-Based
4.7) Strategy
4.8) Controllable Characters
5) Conclusion

History and Origin of the word Roguelike

The genre first started with the game Rogue an ASCII-art dungeon crawler that Michael Toy and Glenn Wichman created back in 1980. This turn-based adventure game, which was modeled by the pen-and-paper RPG Dungeons & Dragons, required players to explore dungeons where they engaged in combat with creatures and collected things to strengthen their characters.

In addition, beginning a fresh game resulted in radically different dungeons with regard to monster placement, chamber locations, and item distribution. Every option the players made had the potential to either result in them continuing to live or ending their lives and starting anew.

This whole new type of game gave rise to a new genre called Roguelike which is now defined by specific few factors. Many games have come out in this genre so let’s dive into it.

Any games that resembled “Rogue” were referred to as roguelike. Players and creators thought they needed a more specific definition that specified the aspects of the game that a title had to meet as the sub-genre gained popularity. The International Roguelike Development Conference held its inaugural gathering in Berlin, Germany, in 2008. Here is where the subgenre’s original definition came from.

There are several factors; whether high value or low value which affect the classification of the game.

The high-value factors include:

Then there are the low-value factors:

With these in mind, many games came out that had all these key features in them. Over time, there were a few differences made which got a new name, Roguelite.

Roguelites, often known as rogue-lites, essentially take a more relaxed approach to incorporate Rogue’s distinctive traits. Roguelites still generally have permadeath. You must restart if you pass away.

The main distinction is that progress can be carried over from one game to the next in roguelites. The manner in which progress is carried over differs depending on the game. Even though permadeath persists, you can typically transfer your acquired weapons and upgrades to your new character. In other words, even if you must restart, you don’t start over entirely.

In some games, you can unlock extra things that might drop during a particular run. Others give you access to new places or give you skills that let you travel to other places and widen your area of investigation.

The Berlin Interpretation lists some characteristics that roguelites typically possess, although they fall just short of being classified as true roguelikes. This just means that roguelite is a half-baked version of roguelike which can make you experience the hard version of the roguelike game without giving you much stress or problems.

Differences between Roguelike and Roguelite

With the similarities confirmed that they both have similar elements, let’s see how they can be differentiated. Here are the few differences which set them apart.

Let’s get to the most important and hardest part of these games; Permadeath. Roguelike games have this feature that makes you start over from zero once you die. On the other hand, roguelites deal with death a little differently. Still, you die and start over but you get some bonus or get to keep upgrades to carry over to the next game.

In roguelike, there is no save point and this is especially cruel if you are just about to finish and unexpectedly die. In roguelite, there is also Auto-save that helps some of the progress to be saved and you can start from the last checkpoint. This feature is offered in some games which makes it much easier to play roguelite games.

Once you die and you know where everything is, the game becomes boring after a few deaths. Yes, you will die a few times as no one can pass a new game without making a single mistake so this is inevitable.

So let’s assume you’re dying multiple times and going through the same path, the same rewards are making your journey boring. This will make you bored and leave the game for a while right? Well, this is how roguelike game is. If you want to visit the game for nostalgia, it must be fun but not in a long run.

On the other hand, roguelite makes the environment new. Everything would be changed which would make every new start interesting. This may make things frustrating if you aren’t able to find that one amazing item you did three deaths ago but it makes the game fun too.

Roguelike games don’t have many rewards to hand out as you get them as you progress while in roguelite games, you can get several rewards after dying or just randomly to help you progress through easily.

Roguelike games have a large map with many paths leading elsewhere. Some areas have no connection to the main story but are interesting to go to. You can run around and explore around as much as you like. On the other hand, roguelite doesn’t have this ability. Roguelite adventures are most strict in their paths and where they want to take you. This takes us to the next point, story and plot.

There is no plot whatsoever in Roguelikes which can be called a “story” it’s just a bunch of tasks or a single straight game path which is the main thing you need to do. Unlike roguelikes, roguelites have a proper story and plot which takes you through the whole area according to the story. This makes playing fun sometimes as you keep anticipating what will come next.

Roguelike games demand extensive planning and serious consideration before each journey due to their very nature. You can’t expect to beat a dungeon by just moving quickly through it. The way the game is designed doesn’t support that.

On the other hand, roguelites may depend entirely on your reflexes. You don’t have to plan anything ahead of time as the game will do it for you. The story progression and small choices can make you progress easily with the exception of keeping yourself alive.

Roguelike games have one character that you play with. Even if there are any options, you can use only one for the whole game. This is different in roguelites and there you can make a team or switch between several characters.

In the competition of roguelike vs roguelite, neither wins over another. The point is that matter how close the like and the lite appear to be, there is a significant difference between them. Even though roguelike games are uncommon, you shouldn’t promote one to a potential player unless they are fully aware of what they entail. On the other hand, roguelites are incredibly well-liked and typically pretty approachable to both casual and die-hard players.

Although Roguelike is now dying down a little due to no flexibility, it’s Roguelite that is still pretty known now. The problem is that even if the game is roguelite, the main genre would still be known as roguelike.

It’s not the end of the world to mix them up and if we keep doing it, we might someday lose the phrase “roguelite” and be unable to distinguish between the two categories of games in any meaningful way. Hopefully, this helped you clear the confusion about the Roguelike vs Roguelite debate. To know about MMO Genre: Meaning Explained in Detail or for more informational articles, stay tuned to Retrology.

What is a Roguelike game? (Explained)

Best Roguelike Games that are on huge discount on Steam Winter...