My Hero Academia Chapter 362 killed off a MAJOR character (Is *Spoiler* DEAD?) 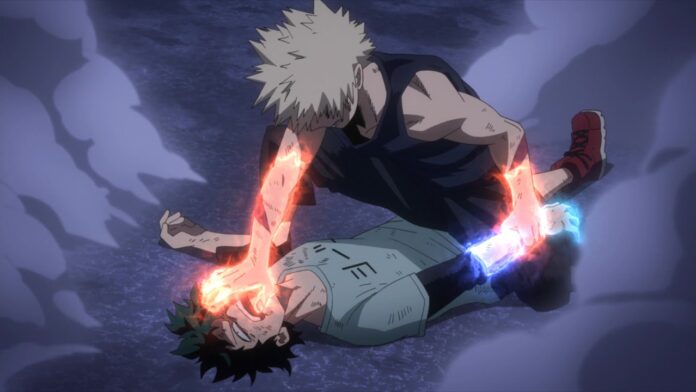 My Hero Academia has been on a roll lately, with the preceding three chapters noticeably building towards another huge clash with Shigaraki and co. The next chapter of the manga series is already going popular on social media and it’s understandable why. The heartbreaking and shocking end of My hero academia Bakugo death left fans really sad. He clearly lost the fight against Shigaraki thus reaching his end.

Tamaki focuses and fires, referring to himself as Vast Hybrid: Plasma Cannon. The beam reaches for miles and miles beyond the barrier, making it one of the most powerful special effects in the whole series. Even so, it is insufficient to harm Tomur AFO.

Bakugo rises when everything seems lost. Shigaraki can’t keep up with him since he’s traveling so rapidly. This is where he is badly injured but he still wants to fight, saying:

Bakugo’s build-up to his demise

After a tough fight and Bakugo muses to himself while battling,  “can I still keep up with you, Izuku?” He fights as long as he can but he does reach a point where he is lost.

Then we see white space where Bakugo meets the All Might in smoke. Bakugo recognizes what is going on and expresses his lone regret: “I really, truly wanted you to sign my All Might card,” said the author.

The news is reporting a dramatic rise in temperature, and the public is perplexed. A panel of Bakugou’s parents appears. AFO inquires as to why they believed they had a chance. All of the heroes are stunned beyond belief. Bakugou’s heart has stopped and he is lying on the ground.

The End of Dreams – My Hero Academia Bakugo’s death

The final page is a double spread that is absolutely distressing. Bakugo has blood on his face, and the All Might card is nearby. However, the MHA community did not foresee Bakugo losing his life during the fight. The presence of the All Might Card alongside Bakugo adds to the pain of the panel for fans.

Many fans wish that Kohei Horikoshi may bring Bakugo back to life through a plot twist, but it’s not really a possibility as they needed a trigger. His death might act as a catalyst for Izuku Midoriya. If yes, this is a devastating but amazingly crafted plot point.

Some fans may claim that in My hero academia Bakugo death is misleading. The reasoning is that he can’t die since he has plot armor and is one of the main characters. I disagree as, in the end, many main characters die so this could also be signaling the end of the series. With one more week to wait for the next chapter, there would be a lot of mourning fans.

For more updates for manga, please follow the manga section and stay updated.