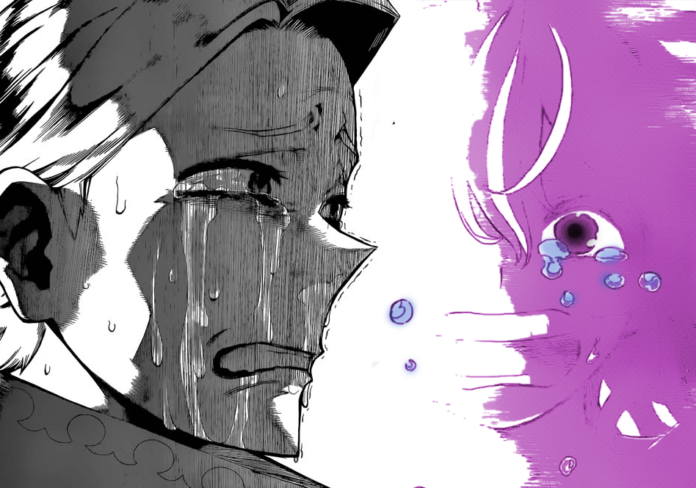 My Hero Academia Chapter 337 discussion should start with the mighty villain, All For One, as the in the first page, he discusses the – recently revealed UA’a traitor – Aoyama’s worth to him. While talking to the villain, Dabi, All For One describes Aoyama as a “cheap lighter that stops working” in case the student gets exposed. This shows how twisted is All For One when it comes to manipulating and using people. Previously, he used the once-hero Nagant for his purpose, and then when she got beaten by Midoriya, All For One nearly disposed of her by activating the secret explosive quirk implanted in her body. My Hero Academia Chapter 337’s title “A Disposable Life” itself shows what it means to be a pawn of All For One. In the main villain’s own words, “He (Aoyama) is nothing but a disposable tool. But it’s even better if he can entertain us for a while.”

Cutting to the forest scene where Midoriya and Hagakure are face-to-face with the traitor Aoyama and his parents, Aoyama’s parents make an attempt to run with their son while Midoriya chants at them to wait. Meanwhile, Aoyama recollects that how his wealthy parents were extremely concerned when it was realized that Aoyama was born quirkless. They did their best to make their son find happiness and continue to find ways in their power to not make him feel “different”. Whilst doing so, they came across the rumor that their son could be given a quirk without any cost. Of course, that’s how they got in the hands of All For One who bestowed Aoyama with his laser quick.

Speaking of his laser quirk, it was found right a the beginning that the quirk was quite incompatible with the user’s body. However, it can be seen in a panel that Aoyama’s parents brought him the belt device he uses in order to control his powers. Things finally started to improve with the new given quirk, giving Aoyama hope to become a compassionate hero. But not long after that, the Aoyama family started listening directly from All For One.

It was unveiled that it was All For One who instructed Aoyama to join UA High School as All Might was going to be there. Furthermore, the All For One kept getting information from Aoyama as such “when the class will be isolated” and the location of the training camp – that was later invaded by the Villains group. His last order to the traitor was to lure Midorya out and isolate him.

Later on, Aoyama expresses that he felt ultimate despair by the letter that Midoriya left before leaving UA. As in the letter, Midoriya revealed to his classmates that he himself was quirkless too and that his quirk was given to him by no other than All Might. It’s worth discussing here that the two students present before each other, both have their quirks given to them by two of the strongest forces on good and evil sides. Midoriya was given his powers by the beacon of peace, All Might while Aoyama was given his quirk by the symbol of evil, All For One. Aoyama then launches his laser attack on Midoriya while the latter activates One For All in order to defend.

Hagakure comes to light as she blocks the laser from her body causing the laser to reflect in another direction while becoming a shield for Midoriya. She explains that her invisible body can make light bend its way. Soon after that, she yells at Aoyama in sheer disappointment and grief mixed with anger that even being a traitor to the whole Hero association, he still had the nerve to sit and laugh with his classmates all this time. She reminds him that due to his treachery, all of his classmates could have lost their lives. Not just that, but in the recent events, his actions put the whole of Japan in jeopardy. This is also the moment that we finally get to see a glimpse of the long-awaited Hakagure face reveal that you can see in the panel below.

After that, Midoriya captures all three of the culprits with his Blackwhip, saying with teary eyes, “let’s put an end to all of this now.” In the next scene, Aoyama and his parents are seen in the custody of UA principal, All Might, and fellow teachers and security. The whole 1-A class is also present in the background. When the principal asks them to leave, they simply refuse. While Ojiro asks Aoyama about his future intentions in awe, Kirishima goes into denial. Aoyama’s father tries to explain that they were only following the orders given to them. If they had not done that then All For One had killed them as he showed them multiple examples of failed followers. Aoyama’s father tries to shift the blame from his son to himself and the mother by stating that Aoyama never knew any of this and his only job was to not let anyone find out about their connection with All For One and that his parents are the real culprit here.

Aoyama breaks the ice and repeats Hakagure’s words to his classmates that despite putting everyone in danger he still shared laughs with his team. He further states that when he find out that Midoriya was quirkless but how he fought back with his fate and tried his very best throughout his course, he realized that he was nothing but truly miserable who couldn’t act right given the same circumstances. Aoyama then self-loathes by describing himself as “rotten to the core” and saying to this classmates that he is a downright villain.

Seeing Aoyama self-loathe, Midoriya intervenes and adds some crucial points. He asks Aoyama that if he is actually a villain then why did he help Tokoyaki and Bakugo back in the training camp and that why did he leave an S.O.S in the night for Midoriya. All of this implies that Aoyama is not rotten to the core and that he deeply regrets his actions and was indeed bound in the hands of All For One. Midoriya gives him the example of the fallen her, Nagant that how she was used by All For One but she still didn’t lose her spirit. In the end, Midoriya asks the tied Aoyama to take his hand and says that he “can still become a hero.”

Bakugo notices this act and thinks that Midoriya is up to something good. We think that Midoriya will eventually convince Aoyama to take sides with the heroes and play the double-agent game just like Hawks. As Aoyama feeds information directly to All For One, this can prove very beneficial to the Hero Association. But who knows that how things would turn out to be? Would Aoyama be courageous enough to betray All For One? Would he get redemption after all of this?

Let’s find out in the next chapters. That’s it regarding the My Hero Academia Chapter 337 discussion. For more reviews and discussions, keep following Retrology.