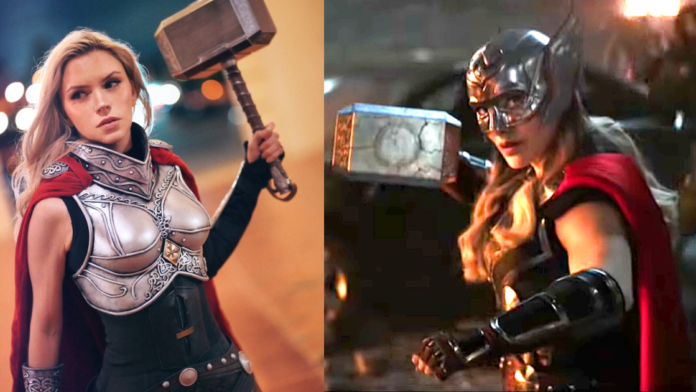 Recently in Thor: Love and Thunder trailer breakdown we discussed numerous secrets that have been revealed and one of them is Jane Foster as the female Thor. Jane Foster is definitely one of the most hyped characters in Thor: Love and Thunder, and even though we only got to see just a sight of her in the trailer, fans have already come up with Jane Foster fan art that is more than just amazing. Ever since the trailer has been released it has created a buzz on the internet and fans cannot wait to see Jane Foster in action. However, for that, we might have to wait for a while, but for now here are some of the most stunning Jane Foster cosplay that’ll make you crave for more.

The Cosplayer here is Armored Heart @cosplay_heart, who is an LA-based cosplayer and has done an exquisite job in showcasing Jane Foster. Armored Heart has a huge fan following of around 250k followers on Instagram and about 19k followers on Twitter.

The whole armor looks very realistic, detailed, and comics-accurate. One of the best things is the fact that the whole costume is not too polished but shows a worn-out look, depicting the idea that Jane Foster is an ultimate warrior.

The design of the costume here totally stands out, the costume definitely has the ability to give away the appearance of the real armor rather than a simple prop.

The next cosplayer we have is Gracie @Graciecosplay and just like us, she has definitely made a lot of fans believe that this might be the leaked images of the real Jane Foster. The whole cosplay looks impressively realistic, the Mjolnir looks charged enough to take down some enemies right away.

Another stunning element of the costume is its helmet which complements and completes the whole look of Jane Foster. Considering the fact how exceptional cosplay skills Gracie has and how sensible her whole costume and even the Mjolnir looks, makes this the best Jane Foster cosplay that we have seen so far.

These were some of our favorite Jane Foster cosplay by some unbelievable artists, make sure to check them out and explore more of their work as well. For more cosplay and fan art collection, keep following Retrology.

Jane Foster fan art that is more than just amazing