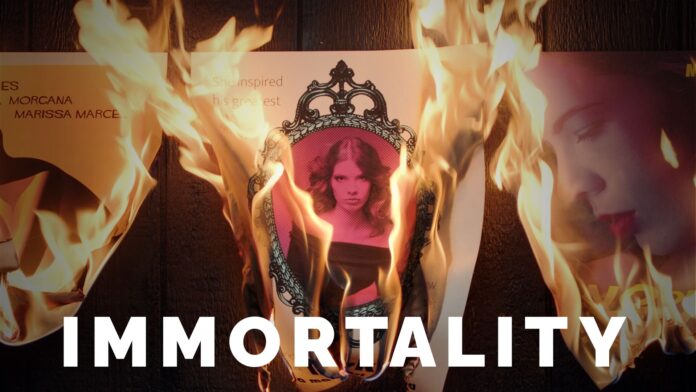 Half Mermaid Productions published Immortality, an interactive film video game developed by Sam Barlow. It’s an interactive movie, one of the few of this kind of game. Recently, it’s been getting many good scores making it one of the top-rated games ever. Let’s analyze the different scores and Immortality Review to see the reason why the game is so good.

Contents
1) Main Idea: Plot of the Game
2) All Top Immortality Review Scores
3) Why is it so highly recommended?

Main Idea: Plot of the Game

Marissa Marcel’s story is one of immortality. A young Film actress who makes her debut as the lead actress in two films in the late 1960s and early 1970s and returned for a new picture in 1999. None of the films she appeared in were ever released, and the young actress vanished from the public eye following her final film in 2000.

The game explores her disappearance by constructing a compilation of her last recorded moments throughout the three films for you. You must uncover answers and unravel the mystery of what actually happened to Marissa and the sequence of events that led to all of the incidents that happen to her along the way as the player.

As you solve the mystery of each film, you grow closer to discovering why these films were never released. The plot then draws you into the seriousness of numerous circumstances, settings, and other locations where you are awarded for delving into the game and attempting to put together a jumbled collection of footage to discover the truth behind each of the sad happenings.

Why is it so highly recommended?

With the scores given above, you’ll have the idea that this game is highly loved and recommended. Many people have given their reasons in detail and we’ll just give our thoughts here.

Immortality will linger in your mind long after the credits have rolled. You’ll want to learn more, explore deeper, and uncover more videos. There’s a lot to see here, and countless mysteries concealed within this game that appear to be just a moment’s intuition away. Even if you’ve appreciated Sam Barlow’s previous work, the scope and depth of mystery in this one are vastly different. His and his team’s work is nothing less of a masterpiece.

The controls and the transitions are flawless. The game progresses in the form of multiple clips which vary in time. Some are from one year and then suddenly you’ll skip to another year. This is confusing but exciting as it builds up the mystery. The controls are super simple too.

Immortality is a game that will make you appreciate story-driven interactive games. Games like these have fallen out of favor, and few are being created nowadays. While they are still a micro-niche in current gaming, Immortality is one of the top FMV Games.

The only issue that is majorly affecting the scores to stray from the perfect one is the pacing and the storyline. Players have complained about the storyline being too convoluted, making it confusing. As too much is sometimes bad, this seems to be the case here. Also, the story progresses slowly which adds to the confusion. This really isn’t a problem once you get familiar with the characters.

If you find these Immortality Review scores and plot interesting, do check the game out. It’s available on Windows, Xbox, and Playstation so get it and play on any device you have.

We recently did Sword and Fairy: Together Forever All Review Scores so if interested, do check it out.