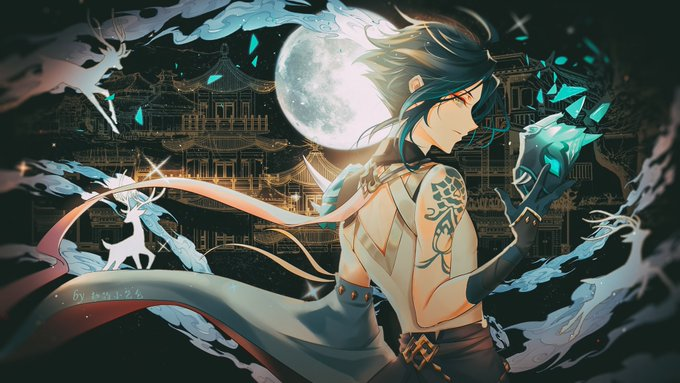 Genshin Impact is an action role-playing game that was created and released by miHoYo. Over the course of years, it has really taken off. It got famous for its anime-like graphics and the immersive range of characters which have been the focus of numerous fanarts and cosplays. One of these characters is Xiao who was added to the game in 2021 but still gained popularity like many others. Let’s look at some of the Xiao Fanart and praise the efforts artists have put into giving life to their favorite character in their style.

Xiao is an adeptus, under the name Alatus, and the sole surviving member of the five foremost Yakshas dispatched by Morax to subdue the demonic spirits that plagued Liyue. Xiao is a man of few words. Only speaking when he thinks it is needed and prefers actions over words. Xiao has a dark past he doesn’t casually mention to anyone.

Now that we know about the character in question, let’s get into the fanarts!

Let’s start with a fanart by the Twitter user, szxjart. This is a perfect example of how sketching can be colorful and still filled with rough shading. The art neither looks realistic nor looks “simple” too which is basically anime’s goal. Good job!

Let’s tone the anger down now with this chibi version of Xiao. It is drawn by Taestymaee who gave the dark Xiao a cute look perfectly!

This fanart by @fiannon_ is really detailed and beautiful. Like a masterpiece, you can’t get your eyes off. The attention to detail, highlights, and the contrast between his eyes and mask is all there. DO check out this super talented person!

If you want to see what Xiao will look like as a Rock artist, here’s an example. The heavy lights and outfit all compliment the dark aura of Xiao well. This is by Denxu0 who is on Instagram. They are a fairly new artist so do check out the recent pieces.

A modernized Xiao was missing so here is his portrayal in everyday life. The clean aesthetic paired with smooth drawing is really beautiful. Maybe I will be biased here but Keito.Kun has one of the cleanest character drawings I’ve ever seen. Do check out his account on Instagram, Keito.Kun, and see his talent for yourself!

The art and concept are really captivating for this fanart. Considering how he is the only survivor of the five initial groups, he may be lonely sometimes. This can be a reference to that. This beautiful fanart is by Kgynh on Twitter.

I don’t feel like I need to say anything about this piece. It’s beautiful, it’s crisp with amazing detailing. The artist is @zed_xiaolongbao so do visit his profile and appreciate his work.

This is it for the Xiao Fanart and these are all our picks. Do let us know if you’ve any that you may like. If you’re an anime fan, we’ve got a few pieces covered for some notable anime characters like Spy X family (three main characters), One Punch Man Fubuki, and Komi-san Can’t Communicate Komi-san herself.

All Cyberpunk Edgerunners Fanart you have to see