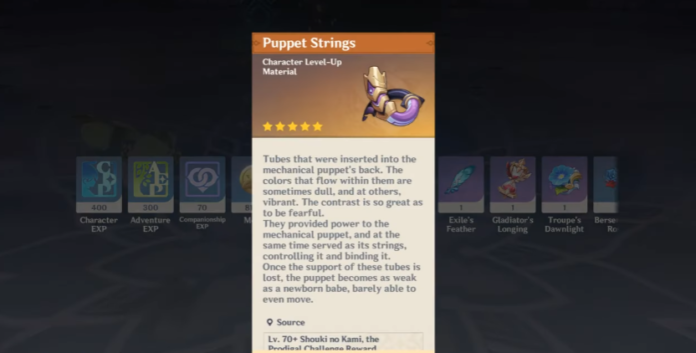 With the new update of Genshin Impact 3.2, new quests and storyline have been added to the existing material in the game along with a new character, Nahida. For this new character in Genshin Impact, you may need puppet strings and a way how to find them. To help you with that, this guide will tell you how you can have access to the Puppet Strings.

During this quest, you have to defeat a weekly boss. Weekly Bosses are tougher than Regular Bosses and offer players higher rewards. One of those is Scaramouche whom we are going to talk about today.

What are Puppet Strings

Puppet Strings is a Talent Level-Up Material that is used to raise the level of certain Combat Talents above the starting level of 6. This item is currently only available to use for the new character Nahida.

Another use of Puppet strings is the crafting of two different items:

To obtain the Puppet Strings for the Nahida character, you must first complete the Akasha Pulses, Kalpa Flame Rises Archon quest. Please keep in mind that you must have Adventure Rank 35 or higher to begin these quests. There are five quests, and you need to complete all.

Go to the Scaramouche Boss domain

This will grant entrance to the Scaramouche Boss domain, which can be found on the map by visiting the Joururi Workshop. Choose a level 70 or above challenge. The workshop is located near Chinvat Ravine in Tevyat, as shown on the map.

Once there, select Memories: Lucent Altar of the Everlasting IV which is the Scaramouche weekly boss’s domain.

Defeat Boss and get Puppet Strings

To accomplish the task, enter the domain and defeat the Scaramouche boss. After defeating the boss, talk to Ley Line Blossom and use 30 Original Resin to receive your goodies.

Players can finish this domain as many times as they like, but they can only earn rewards once per week. This can be done by opening the Ley Line Blossom with 30 Original Resin for the first three Weekly Bosses. After that, 60 Original Resin are required every time you need access to rewards.

Also keep in mind that rewards are not the same every time you go to collect them, as they are randomized most of the time.