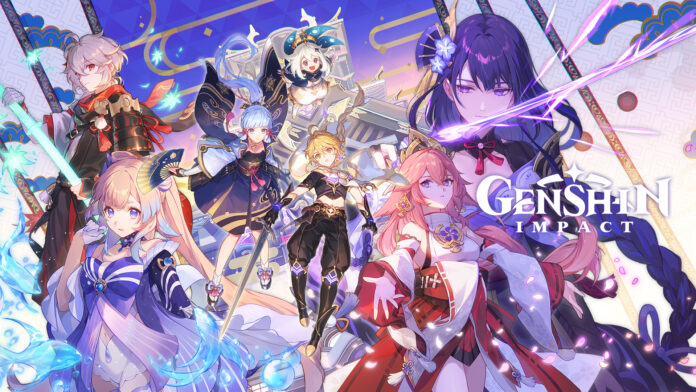 Genshin Impact has become a lot popular in recent times, its anime-style open-world gameplay that uses elemental magic and different characters has really attracted a lot of players. The story follows a fantasy world with seven different nations each one ruled by a different God. The traveler who has traveled many worlds has lost his sibling in Teyvat. The traveler now explores the whole world of Teyvat in search of his lost sibling and gets involved in the matters of Teyvat’s nations. However, in this guide, we will tell you how to activate the two bells of the ruins in Gesnhin Impact.

The map shows the location where Bell #1 is located, teleport to the waypoint that is the closest to it. Once you have teleported, now head towards the location, you might have to parkour your way up, and as well as deal with some enemies on your way to the location. You can also avoid the enemies for now by just running past them.

After running past the enemies, you will find a Seelie, next to it will be some vines, use those vines to climb all the way to the top of the tower. Once you reach the top, now use the Lumbonstone Adjavent to activate the mechanism to unlock the totems.

After that use your Blooming light (Z key ) to clear out those purple crystals and dark mud, you will also have to recharge again after using blooming light because your energy will get lower every time you use it, you can recharge from the totems that are activated and also from the seelie on the ground. Once you’ve cleared the purple crystals, all of the totems will be activated.

Now you will have to take down the Banished Knights that will spawn once all of the totems are activated, defeat the enemies and clear any remaining mud till the bell appears. Now smash the bell with a weapon to finish this part.

The next bell will be located on the south of the stony halls, follow the map for its exact location, and teleport to the wayout that is closest to it. Now head inside the tower where you will find two Seelies, four lantern and a totem that can be recharged permanently. Recharge the totem to illuminate that area.

Now to activate the tombstones you will have to move around the seelies. Place each seelie next to two different tombstones to illuminate them. Moreover, remember that seelies will only move when you go near them. For the last tombstone, you can illuminate it by yourself. Get close to the tombstone and all four will now illuminate at the same time. A chest will now appear.

After that get into the room where the Ruin Grader is sitting. Get rid of any purple mud on the ground. You will then have to defeat the Ruin Grader to reveal the bell. Once the bell is revealed, ring it and you are done with the Bell #2.

That is all on How to Activate The Two Bells of The Ruins in Genshin Impact. To know about How to unlock Shakkei Pavilion Domain or for more Guides, keep following Retorlogy.

How to Destroy the Bedrock Keys in Genshin Impact