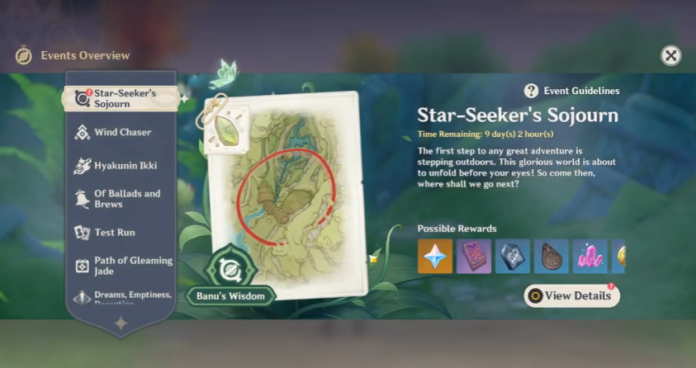 Basics About the Event

Go to the Devantaka Mountain using a teleport point nearest to it. There, search on top of the ancient ruin machine for a giant gear. You can see the location on the map too.

Once you reach the point, you’ll have to find the Future Star, a green crystal, by following the trail. Use wind tunnels and four-leaf sigils to reach the arm of the machine nearby. Climb it, but be cautious because if you don’t hop over obstacles, you could easily fall.

When you reach the top you’ll see more wind tunnels and Four-Leaf Sigils. Using them, go to the location it takes you and you’ll find the Future Star there. The exact location can be seen in the reference picture above.

Go to the westernmost ruin, which is outside a small, abandoned building southwest of the King Desheret Mausoleum. The glowing spot can be found next to a dormant Primal Construct which is the spot you’re searching for.

Once you interact with it, You can see that Day 2’s puzzle is simply a combat challenge. You must defeat three Primal Constructs (one at a time) for the “puzzle” to be solved. Simply eliminating the Primal Constructs will reveal a wind tunnel in the center of the demolished structure.

You’ll notice the Future Star perched atop a rock while in the wind tunnel. Fly up there and grab it. For this one, you won’t need to look far in order to find the star because it is just next to you.

The southern region of Sumeru’s green forest area, where Apam Woods are located, is where The third Future Star, is to be found. Spot the grey circle and you’ll see the glowing spot here.

The puzzle’s beginning will be visible on top of a grey circle. You must employ a Pyro character, like with other puzzles of similar kind, to ignite the four torches that may be located nearby this grey circle.

Use an Electro character’s ability on the floating green thing to fully disclose the two torches that are blazing blue, though. The torch can then be lit by applying pyro to it. There are two torches to the left and two to the right of the circle. Any order can be used to activate them.

The Future Star will appear on the platform, where the light was previously, in the middle once you have lit all four torches. You can also see if the torch is working in the circle to see the light turn on beneath it.

The fourth Future Star, is situated south of the Statue of the Seven in the Sobek Oasis, which is in the southwest corner of Sumeru’s Desert.

Fly up and you’ll easily spot the initial glowing light. Once the quest is initiated, get to the top using the wind tunnel and the Four Leaf Sigils, then, take a leap of faith and traverse the air to the north side of the cliff.

After reaching a stop, aim for the floating green creatures with an Electro archer character and hit them to activate the solid floor. The pattern of reaching the crystal is as follows.

You can also do it by looking at the false floor and judging by the edges for where it’ll end. This is way is faster as you don’t have to wait for the green flying item to come close.

The fifth Future Star, is located by the large oasis of water east of Sobek Oasis and below the Dar al-Shifa area.

This puzzle is another combat challenge with slime and fungi adversaries of various elements, can be found on the north side of the pond. Kill 10 of them and you’ll automatically be notified of the location of Future star.

The Future Star is located in the middle of the small piece of land that lies in the oasis’s center.

The sixth Future Star, is located on the northside of Gardharva Ville , which is in the eastern area of Sumeru’s green forests.

The Future Star is located on top of the large tree in the middle of the village, but to get there, you’ll have to find the glowing spot location noted above first, which activates wind tunnels and Four Leaf Sigils.

Climb up the brown wood that sort of looks like a large ladder to go further up the tree still. From here, all you have to do is walk forward on the tree until you see a branch with a bouncy green mushroom on it.

The Future star is above this mushroom, so bounce on it and float into the Future Star to pick it up and complete this hunt.

For the very last star, All you’ll need to do is use the teleport Waypoint and go to Banu. She’ll talk to you about the Future stars asking if you’ve collected all and what to do with them now. Just follow along with the conversation and keep doing what she wants you to do.

You’ll need to go to the top of the hill for the quest to continue. It would be mostly listening to her story and the reasoning for all the stuff related to the storyline of the event.

Lastly, submit all six green Future Stars in the structure present there and shown in the picture above. The quest would conclude here and you’ll receive your final rewards.

You only have until Monday, October 31st to claim these rewards, so discover every Future Star you can before then.

Hopefully, these descriptions have been helpful for Future Star Locations for Genshin Impact The Star-Seeker’s Sojourn event. If you’re done with it, you can check out these Genshin Impact guides for other quests.