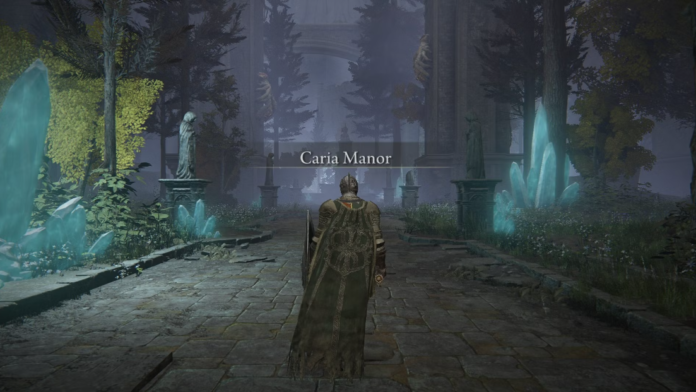 Elden Ring’s Caria Manor is a location in the extreme north of Liurnia of the Lakes, there lies a sizable estate called the Caria Manor. A large, well-guarded dungeon with numerous interesting items is called Caria Manor. To enter the northeast sub-region of Three Sisters behind the estate, one must defeat the boss and complete this dungeon. It is defined as:

“A large estate situated far to the north of Liurnia. Heavily guarded by all manner of creatures as well as its eternal warden, the spectral Royal Knight Loretta“

The northernmost portion of the Liurnia of the Lakes region is where Caria Manor is located. You must pass through the Kingsrealm Ruins’ illusory wall and then take the path that leads to the Main Caria Manor Gate in order to get there. You should be aware that Glintstone Arrows will be fired at you while you travel down this path, so use your agility to escape them with Torrent. When you get to the Site of Grace, you can safely start looking around Caria Manor.

As you enter the Manor, you’ll come across the main area with three paths going left, right, and ahead. This is the ground level and is filled with Fingercreepers so keep an eye out for them.

Located to the west of the Gardens is the Chapel. A Site of Grace is located on the higher level, and walkways in the grounds connect it to the upper level of the house, where you can access a variety of valuables.

Take the right path first, which goes practically directly away from the Site of Grace. When you get to a staircase on your left, glance over the railing, then descend.

One of Elden Ring’s potent and distinctive weapons, the Sword of Night and Flame, can be found at the end of the road to the left.

Once you return to the middle, proceed straight ahead. This would be though the bridge and have many opponents here. Go past them and avoid as many as you can. Continue to the next building and take the elevator up to the next site of grace once you reach the end.

In Elden Ring, Royal Knight Loretta is a boss. The ghost of a knight on a horse is Royal Knight Loretta. The Caria Manor in northern Liurnia of the Lakes is her territory, and she defends it with a polearm and strong glintstone sorceries. In order to enter the northeastern parts of Liurnia behind the estate, which contain sites crucial to the story, players must battle Royal Knight Loretta.

In Caria Manor, near the Moongazing Grounds, is Royal Knight Loretta. To get here, you must first ascend to the top level, which is the sizable circular platform northwest of the manor.

Here are few tips on how to avoid her attacks:

First and foremost, remember to keep your distance from her as much as you can. Use attacks and magic to cover a large range so you don’t have to get close. With this stressed enough, let’s move on to how to defeat her.

The main thing that you’ll need to do is to understand her fighting pattern and how to avoid her attacks. You can dodge and avoid all of her attacks if you move fast enough. None of the attacks are on a large scale making you trapped. Use speed to your advantage. With this distance, keep throwing easy and fast attacks toward her. Don’t choose the ones with prep time as she can get close and hit you.

When her life drops down to half, the second phase will start. There aren’t many changes in her pattern or attacks other than the fact that they deal more damage now. Some of her attacks become combo moves which make you focus more on dodging than attacking.

Carian Phalanx is the move used by her a lot. It can be quite annoying but once you know how to avoid it, you can remove it in an instant. In the first phase, only three swords are summoned but the number increases in phase two. The swords come at you in two turns so don’t be fooled by the first one and dodge the second attack before moving forward.

Also with some of her heavy attacks, once she uses it, you’ll have a big enough window to strike a few powerful moves on her. This kind of makes phase 2 easier as now you can finish her off quicker than phase one.

Once Royal Knight Loretta is defeated, the following items are dropped.

A short distance south along the route, turn left to uncover a string of granite ledges. To get to the scaffolding, drop along them. To get to a rooftop within the official manor grounds, follow the scaffolding. Then, go down a ladder to a room where Pidia, a trader, is located. Pidia offers a variety of priceless artifacts there like:

With that, let’s end this long description of Caria Manor. For more Elden Ring guides, check our site Retrology.