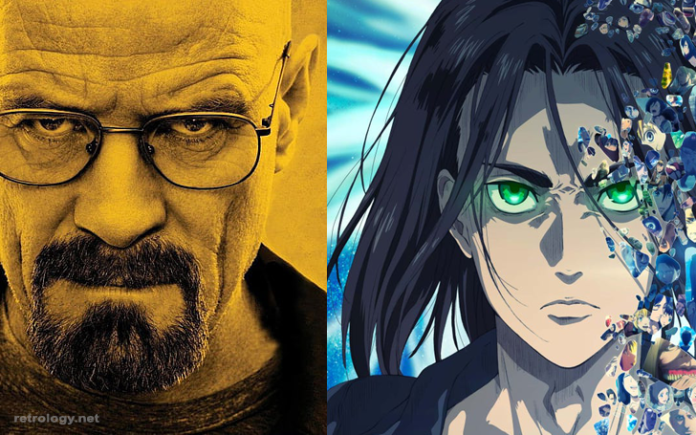 Attack On Titan is taking not only the anime industry but the entire entertainment industry by storm. With weekly episodes coming out that top the IMDb charts within hours the series has earned a well-deserved reputation for itself. With the 78th episode of the anime earning a 10/10 after less than a week of release, the series has started to get backlash from other popular TV shows. Breaking Bad fans started review bombing Attack On Titan with 1-star ratings.

Before Attack On Titan’s 78th episode, Breaking Bad’s Season 5 Episode 14 “Ozymandias” was the top-rated TV episode on IMDb with a user rating of 10/10 by over 150,000 votes. It was angering Breaking Bad fans that the anime climbed up to the 2nd spot by getting a majority of user ratings of 10/10. This caused Breaking Bad fans to start review bombing previous episodes of the anime that were included in IMDB’s top 10.

Some of the negative reviews on Attack On Titan with 1-star ratings included:

“Absolutely disgusting episode, I don’t get why people like this episode so much nor why it has a 10 star rating. This anime is probably one of the most overhyped anime ever after naruto”

“Anime starts off good with a nice plot, execution is so bad and predictable, much better anime out there to watch over this mid show, could’ve made the show better IMO”

“very bad episode. There is no logic, just do a lot of things in a loop without understanding any of it. and just kill the characters for no reason and without knowing how.”

This resulted in the dropping of perfect rating to 9.9/10 as well as a fall of ranking from 2nd to 14th in the top-rated TV episodes category.

This kind of feud in between fandoms is not new. A while back fans of popular anime One Piece and Attack On Titan were arguing over IMDb ratings and review bombing each other’s popular anime episodes. Even though it is nothing new, it is something getting worse every day. Furthermore, the same happened with Attack on Titan Final Season Part and Fullmetal Alchemist: Brotherhood. When the former got an overall higher rating than the latter, the fans of Full Metal Alchemist Brotherhood united, and instead of bombing on the reviews of Attack on Titan, they gave a 10/10 on Brotherhood’s IMDb profile, which the show to be back on top.

What do you think could be the possible solution to this? Should IMDb close the ratings after a certain period of time or once the rating has been properly established? Should the platform just remove the new toxic ratings? What can these rating platforms do to avoid this debacle? Let us know in the comments below.

That’s all regarding Breaking Bad fans review bombing of Attack on Titan. For more content, do check out our dedicated sections of Gaming, Guides, and Reviews of all sorts of Entertainment news.