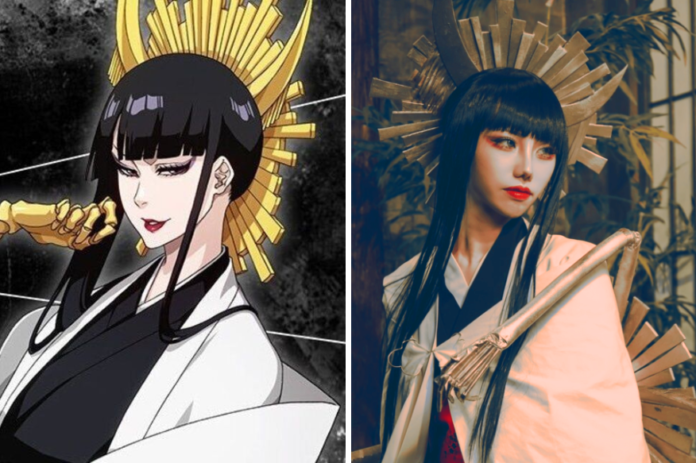 Bleach is a supernatural story about Souls and Soul Reapers written by Tite Kubo. The manga was later also adapted into an anime produced by Studio Pierrot. The protagonist is a human teenager, Ichigo Kurasaki, who has the unique ability to see souls in the human world. After learning his classmates at school also have powers of their own, he teams up with them to play his role as a “Substitute” Soul Reaper. This person dressed up as Senjumaru Shutara in this cosplay and it is nothing less than amazing.

Senjumaru Shutara, also called the “Great Weave Guard,” is a shinigami who is the Fourth officer of the Zero Division and also the Divine General of the North. Moreover, she has long straight black hair and six gold skeletal arms on her back. This cosplayer brought Senjumaru Shutara to life in this stunning cosplay.

They posted the cosplay on their Twitter account, @lonewolf_98, and left the audience speechless. In these images, you can see them posing gracefully as the beautiful Shinigami. Additionally, they are seen using their artificial gold arms instead of their real arms which shows how true they are to the cosplay as Senjumaru Shutara is also known for not actually using her real arms.

The cosplayer has put a lot of effort into their makeup and the beautiful and unmistakable headpiece.

Here the cosplayer shows off her artificial arms attacked to the piece on their back.

Once more, the cosplayer can be seen making use of their artificial arms as they look over some spider lilies. Spider lilies are often said to guide the souls to a rebirth which perfectly fits Senjumaru Shutara as she is a Shinigami after all.

That is all for this breathtaking Senjumaru Shutara cosplay, be sure to appreciate the cosplayer on Twitter. Bleach will be getting a new season later this year which will cover the Thousand-Year Blood War arc. For more anime content, be sure to stay tuned to Retrology.

List of Best Bleach Filler Arcs that you may skip (or...

Bleach creator is “involved in every step” of anime production