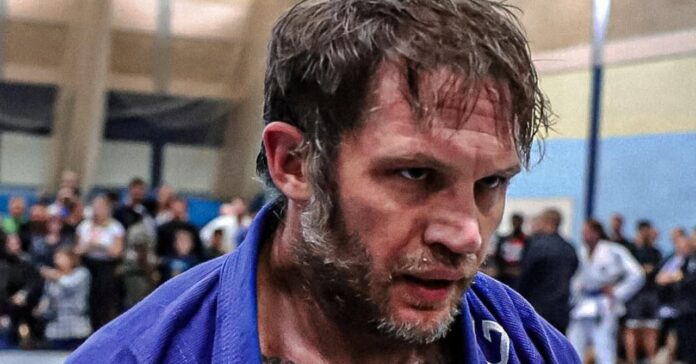 Tom Hardy proved that he takes his characters quite seriously. It seemed as if we are seeing Bane from “The Dark Knight Rises” and Tommy Conlon from “Warrior” in real life when he not only showed up at the 2022 Brazilian Jiu Jitsu open competition in Milton Keynes, England without any announcement but Tom Hardy also wins gold. This truly shows why Tom Hardy has so much reputation for action-intensive roles.

A spokesperson for the event mentioned “Everyone recognized him, but he was very humble and was happy to take time out for people to take photographs with him,” adding  “It was a real pleasure to have him compete at our event.”

Danny Appleby who was the opponent of Tom Hardy during the semi-final match had some excellent remarks about Tom, saying “genuinely a really nice guy.” Appleby also mentioned that he was shocked to see Tom Hardy appearing at the event unannounced and during the fight, Hardy said to him  ‘Just forget it’s me and do what you would normally do.’

Here is what Appleby had to say about the fight “He’s a really strong guy… You wouldn’t think it with him being a celebrity. I’ve done about six tournaments and I’ve been on the podium in everyone. But he’s probably the toughest competitor I’ve had — he certainly lived up to his Bane character, that’s for sure.”

Tom Hardy is a blue belt and has been interested in mixed martial arts for many years. This 2022 Brazillian Jiu Jitsu championship in Milton Keynes is not the only time Tom Hardy managed to land a victory this year. Tom Hardy is also the successor of the REORG Open Jiu-Jitsu Championship in Wolverhampton, which happened back in August.

It might take quite a while for us to witness something so extraordinary like Tom Hardy wins gold, however, to keep yourself updated with the daily news or for more entertainment, be sure to keep following Retrology.