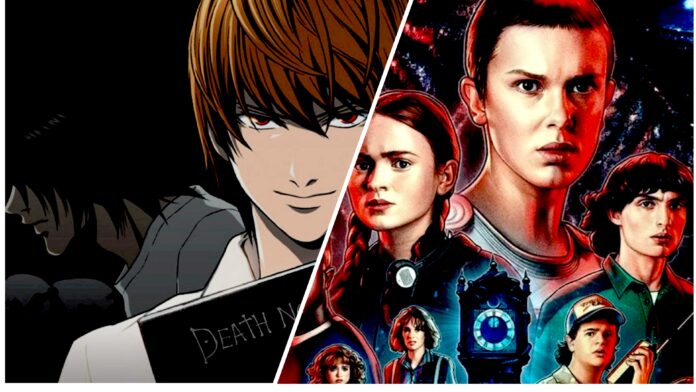 The decision of the Duffer Brothers to take Death Note live-action into consideration was a piece of shocking news. Primarily considering how vastly different it is from their previous production Stranger Things. With its last season just around the corner, Duffer Brothers want to work on new projects as soon as possible.

According to Deadline, Netflix has partnered with Upside Down Pictures, the production firm run by Stranger Things creators Matt and Ross Duffer, to produce a new live-action Death Note version. The new version will have nothing to do with Netflix’s notorious 2017 adaptation.

For those of you who don’t know about Death note, here is its brief premise. Death note is one of the top-rated manga and anime series written by of Tsugumi Ohba and Takeshi Obata. The plot revolves around the antagonist, Light Yagami, who finds a strange notebook known as the “Death Note”.

This book provides the user with the superhuman ability to kill anybody whose name is inscribed on its pages. The story revolves around Light’s attempts to utilize the Death Note to carry out a worldwide killing of those he considers immoral. He aims to establish a crime-free society under the name Kira (God in Japanese). Other notable characters include Detective L, Ryuk, Misa, and others.

Considering their choice, it is evident that they like to work with imaginative, sci-fi fiction. It may give them a lot of creative liberty. Their move to take on Death note and other projects like series created by Jeffrey Addiss and Will Matthews, the creators of Netflix’s Dark Crystal: Age of Resistance and a series based on Stephen King and Peter Straub’s 1984 novel The Talisman, shows their passion for taking on challenging and compelling shows.

The Duffers stated that they want to tell stories that inspired them as children and said:

“Stories that take place at that beautiful crossroads where the ordinary meets the extraordinary, where big spectacle co-exists with intimate character work, where heart wins out over cynicism.”

Buffer Brother has said to start working on Death Note after a few weeks break from the Stranger Things Season 4. According to this, it is speculated that it will start its production near the end of this year. The cast, crew, release date, and other information is yet to be revealed so stay tuned for that.

With the Duffer brothers declaring their desire to revisit Death Note after such a half-hearted try in 2017, there were some mixed opinions.

Some are not as much bothered. They believe that Duffer Brothers will handle Death Note live-action just as amazingly as they did with stranger things. I agree that that is a huge comfort knowing their talent and approach so no questions asked on that.

Still some fans believe that this franchise should be left alone as the previous live actions were far from good. There really isn’t any need to take a Japanese work of fiction and give it a western adaptation.

This could be a remark as it is Japanese fiction and based around that type of community but you can’t argue the fact that it can be marginalized. The negative response may be from the trauma. We can hope Duffer brother taking Death Note live-action is a good idea.

For more news on your favorite topics, visit our entertainment section and do follow our website Retrology.