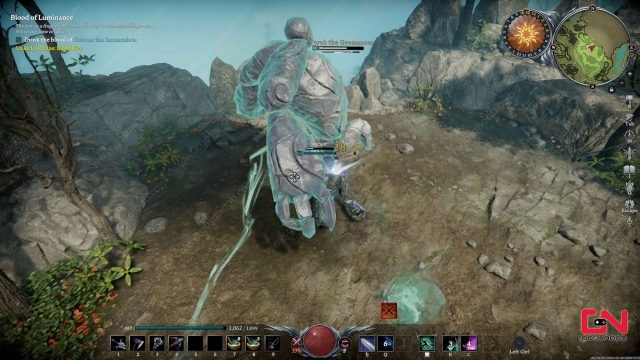 Some clashes are unavoidable in the world of V Rising, where multiple beings coexist. Terah is one of the bosses you must kill in order to proceed through the game. We’ll go over everything there is to know about Terah the Geomancer Boss as well as its location and how to defeat it in V Rising in this guide.

It’s not difficult to locate Terah, the Geomancer. Terah can be found strolling around in the Bedrock Pass, which is located in the Dunley Farmlands’ northwestern part.

Using the blood altar will let you hunt down Terah with ease, just like it will with the other bosses, assuming your gear score is high enough to take her on.

Recommended Level to Defeat Terah the Geomancer in V Rising

In order to beat Terah the Geomancer, you’ll need any ranged weapon and ranged magic spells in addition to being near level 48.

How to Defeat Terah the Geomancer in V Rising

Although Terah the Geomancer is one of the most difficult opponents to defeat, once you grasp his striking patterns, the rest is easy.

The majority of Terah’s attacks involve stomping on the ground, and they are all fairly slow. Being quick on your feet and moving around as much as possible is the greatest method to take her down.

Terah has the ability to transform into a large golem, and that golem can summon two smaller golems, which you must defeat before you can attack Terah.

Terah can switch between her normal and huge golem forms, so keep an eye out for that. Smaller golems are simple to defeat and can be taken out with basic melee blows.

When it comes to Terah, stay away from melee strikes as much as possible, and avoid getting too close if at all feasible. From afar, use ranged assaults and magic spells.

One of her attacks will cause spikes to emerge from the ground, injuring you severely. Those are easy to predict and avoid.

One of her other attacks is to shower rocks from the sky. A red circle will be drawn around the region where the rock will fall. Stay out of these rings to avoid this attack.

Continue to attack from afar. When she is in her normal form, you can get close to her. Wherever feasible, use magic spells.

The boss’s strikes are all slow and predictable, making them easy to evade. Continue to avoid attacking from afar. Keep doing what you’re doing, and you’ll defeat her.

You will receive the following item when you defeat Terah the Geomancer.

Once you defeat Terah the Geomancer you get the recipe for Siege Golem Stone and Regular Gems. You gain the Vampire Power of Spectral Guardian. You also gain the Structure Gem Cutting Table.

That is all on Beatrice the Tailor location in V Rising. To know about our guide to the best base locations in V Rising or for more gaming guides, keep following Retrology.