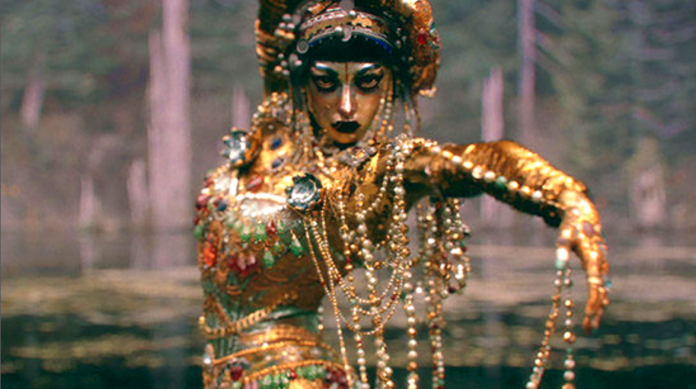 Love Death + Robots Season 3 has received praise all over the internet and rightfully so. While if it is the best volume so far is up for debate, this season surely gave us some incredible short stories. The Volume 3 of Love Death + Robots was already among our list of the top TV shows of May 2022. And now that it is out, we can’t help but re-watching and writing about it. Before we begin this article, Love Death + Robots Episode “Jibaro” Explained, don’t forget to check out our ranking of all of the Love Death + Robots Volume 3 episodes from worst to best without any spoilers.

Speaking of spoilers, this article will contain spoilers for Episode Jibaro. Therefore, if you haven’t yet watched it, first watch it and then come back to this article.

First thing’s first. What is the meaning of Jibaro? In literal terms, Jibaro is a Puerto Rican word used to describe farmers or countryside people. But in the context of Love Death + Robots, it is reportedly the name of the main character, the deaf knight.

Jibaro doesn’t feature a lot of characters. Along with the background characters like the knights and the priests, there are only two main characters that we will be discussing.

First off, we have the main characters, Jibaro, who is a knight but interestingly a deaf one. It is not important that a how a deaf person became a knight but his disability for sure has a very key role to play in this fantasy.

The knight is shown to be greedy right from the start as he secretly collects the golden scale from the lake and doesn’t tell any of his comrades.

As far as his character design is concerned, I must say the creators rocked it. Jibaro’s armor is a traditional silver one but his face resembles someone from a modern era. Tattooed face, septum pierced nose, undercut hairstyle and everything else makes him very unique and well-designed.

Next up, we have the Siren, the golden lady of the lake. Siren is not her name but she actually is. Sirens are mythical sea creatures who lured sailors with their music and beauty. They had female appearances and were often portrayed with wings.

In Love Death + Robots, the Siren has a very alluring design. Her body is covered in jewels, she moves like a dancer. It is both menacing and seductive. Even though, we are unsure about her origin but apparently, she is an integral part of the lake and the nature surrounding it.

Some suggests that she might be the protector of the lake and attempts to kill anyone who tries to steal from or threaten the forest and lake.

Essentially, Jibaro is a thrilling story of greed and lust. There are no heroes in this short. In the words of director Alberto Mielgo himself, “Not everything has to be about a guy that is saving the world or who has a nice hero’s journey, where you can see how he’s evolving into a better version of himself.”

He continues, “In this case, there is no improvement. Actually, it’s the opposite. They both end up being the worst versions of themselves. And there is no lesson that they learn. They both lose. Honestly, I like when a film leaves me a little bit uncomfortable.”

It’s true that Love Death + Robots’ Jibaro is about a toxic relationship of two predators. One who hunts for greed and one who hunts for lust – or even more. When Siren notices she can’t lure the knight, it is then when she really starts to obsess over him, forgetting the fact the he might kill her and was a threat to the forest some moments ago.

For the knight, he accepts the affection of the woman but not for his feelings but for the abundance of gold on her body.

There are certainly references to Greek mythology, Catholicism, Conquistadors, Ballet dancing and more.

If we talk about the plot, there can be many interpretations. On surface level, there seems to be group of knights on a holy mission as they get the prayers of the priests present on the scene. However, their intentions are not that pure as they seemingly are on a conquest of land or to get the gold hidden in the lake or perhaps both.

There comes the Siren, who makes the whole group go in frenzy due to being threatened or perhaps that’s just her nature. The soldiers in ecstasy murders each other and drowns deep in the lake. While Jibaro remains bewildered but unaffected.

The Siren notices and tries to lure him but fails to get to him due to the knight being deaf. This only arouses her excitement as now he tries her lure him with the rest of her charm. Jibaro and Siren finally indulge in romance but the knight end up getting violent and ripping off all the gold from the woman’s body.

This disrupts the lake and we see a flood of blood covering the whole water. It is unknown that how exactly did this happen but it happened after the Siren got hurt by the knight. The bloody water also enables the knight to hear his surrounding that ultimately causes him to be lured by the Siren and meet his demise.

The Siren is left robbed, heartbroken and alone. No one wins. Both the main characters faces the consequences of their toxic relationship just like in real life.

Some people are complaining about the animation of Jibaro. But in my opinion, it is nothing but spectacular. All the jittery camera movements and shifts are intentional as I have great confidence in the direction of Mielgo, the same person who directed yet another amazing episode of Love Death + Robots, The Witness.

Both the art style, and direction contributed a lot in making Jibaro what it meant to be. The sound direction was also on point. From the sound of forest, to the sound of screaming Siren mixed with emotional background music, everything was worthy of praise.

It is incredibly fascinating that the whole 17 minutes short didn’t have a single dialogue and was still able to be one of the most captivating thing I have ever watched.

Before we wrap it up, it is worth discussing the dance-like movements in Love Death + Robots Volume 3’s Jibaro. From the beginning, we saw that Siren wasn’t just appealing through her voice but through looks and moves too. She moved just like someone dancing. But what interesting is that, her victims also moved in the similar fashion. It all seemed like a ballet.

This too was the part of the masterful direction of Mielgo as explained they he specifically hired a choreographer to mimic the movements of a dance.

“it’s keyframe animation. But what I like to do is to record animation reference from, in this case, we had a choreographer, Sara Silkins, that she did a really cool job, and we were basically for two weeks rehearsing trying to figure out what are the movements, what are the motivations of the characters, how do they move, how do they dance, how they communicate all these feelings through dancing.“

He continued, “And even the knights, I thought it was very interesting to use dancers rather than stunt actors or martial arts actors, just because they control their movement. And it’s usually really fast how they move dancers. It was almost like extra violence somehow. So, what we do is basically we record everything in different angles, close ups for the facials and yes, we animate based on those reference.“

All in all, Jibaro was a masterpiece. I have watched a lot of things but I must say that it was unlike most things I have ever watched. It gave me out creeps at first but left me in awe at the end. It provoked both my thoughts and emotions. I was both thrilled and touched with the character of Siren. To me, Jibaro was a solid 10/10, a piece of art and that I would like watch again and again.

Love Death + Robots’ Jibaro is not for everyone to like. People will either detest it or love it. There is no in between. What do you think of this new episode of Love Death + Robots Season 3? Let us know in the comments below as we will be eager to know.

Top May 2022 TV shows that you should be excited for