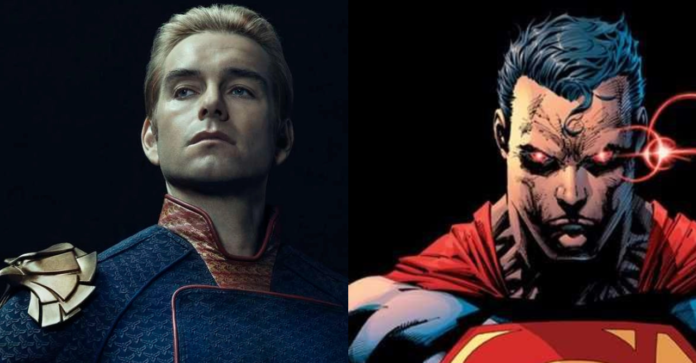 Homelander, one of The Boys’ most poignant superhero parodies, poses the hypothetical question of who would triumph in a fight between him and Superman. Superman is infamous for being the inspiration behind Homelander. In this article, we have made a pros and cons list of who would win a battle to the death between Homelander and Superman.

Speaking of Homelander fighting characters who are just as powerful as the man of steel you might want to check out Omni-man vs Homelander.

Homelander by Dark Horse vs Superman by DC are adaptations of their comic book versions. Both characters stand for the pinnacle of strength in their own realms. Each is the most powerful being in its own universe. Homelander is a superhero that demands equal parts adoration and fear. While the inspiration itself – Superman, is created to be a beacon of virtue and power in equal measure.

Given the obvious similarities in strengths between the two characters, it begs the question of who would prevail if Homelander from The Boys vs Superman from DC. The main goal of this comparison is to determine who would be the last one standing in a fair fight between the two cape-wearing heroes. We will compare their various abilities and disregard any strategies or friends either one might summon for their aid as they fight their final fight.

Superman’s powers are bestowed on him by birth. His abilities and his inhuman strength were possible because he came from another planet.

Compared to Superman, Homelander did not get his powers the easy way. He was experimented on. His powers are present because of an experiment named Compound V which was used to produce superhumans. By chance or design, his body absorbed more Compound V than any other test subject making him the most powerful person in his universe.

Both Superman and Homelander don’t require any kind of “top-ups” to keep them powerful hence we can conclude that both of them are formidable foes to each other.

Superman’s abilities are constantly gone under a change to keep the hero relevant and “fresh”. He initially had a limited set of abilities but as the character’s plot developed and the fan base demanded more action from their favorite superhero his basic superhero skills were not enough. Initially, he had super speed, super strength, and resistance to any kind of harm. But over time he got new skills such as traveling at the speed of sound and the power to destroy planets.

Since Homelander is a parody of Superman, his abilities are created to resemble those of his inspirer. Superhuman strength, speed, endurance, hearing, smell, invulnerability, heat vision, X-Ray vision, and flight are just a few of Homelander’s many special skills. Homelander is without a doubt the top predator of Amazon’s The Boys because no other character has yet been able to harm him because of this special combination of abilities within The Boys’ reality.

Homelander is a cracked character in this universe. He has fought various opponents but most of them were humans whom he could easily overpower with strength alone. In comics Homelander has been defeated by humans too, one such example of this is Billy Buther who cracked open his rival’s skull with a crowbar.

In contrast to this, there is no such instance of superman being defeated by any foe. He has faced off against multiple enemies humans and aliens alike and has overwhelmingly avoided harm from them.

After all the comparisons do let us know who you think will win in a fight-off between Homelander and Superman. Lastly, be sure to check out our Gaming and Guides sections. We cover reviews, news, Best-of, and a lot of other stuff so bookmark us and keep following Retrology.