Vinland Saga Chapter 188 discussion and review: The manga got weird… but for a reason 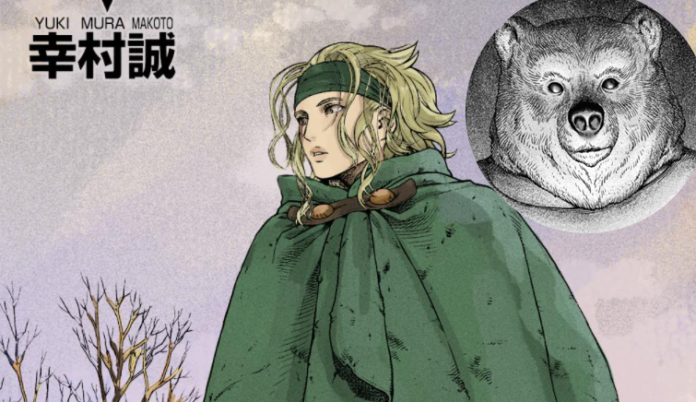 This month’s Vinland Saga‘s chapter was centered on Hild. For quite a while, we have only seen a very redundant side of Hild’s character, which is about her hatred towards Thorfinn. But no one can blame, as Thorfinn is the one responsible for Hild’s parents’ death, her disfigured face, basically ruining her childhood and turning her into a downright predator. However, in the recent arc, we have seen Hild giving Thorfinn a chance for his life given that he doesn’t go back to his violent routes. The big question is that would the female hunter eventually be able to forgive the protagonist one and for all. Vinland Saga Chapter 188 gives us some foreshadowing in a rather weird way.

Also Read: Arcane fan art that you should really check out

Chapter 188 starts with Hild going into a forest to hunt a bear. Upon the villagers’ warning of danger ahead, Thorfinn intervenes and quotes “Bears are Hild’s specialty”. And we all know why. After the death of her family, Hild got trained by a bear hunter. Ironically, her master dies at the hands of a bear, and this event further fuels her hatred towards the world and particularly, Thorfinn, as back in Chapter 120, the huntress images the killer bear as Thorfinn and thereon, initiating her path of becoming a predator herself.

After Hild enters the forest that is densely covered in snow. She tries to track the bear with its footprints. While doing so, she realizes the fact that it has been so long that she has gone for a hunt like this. Then we are shown the stills that highlight the soft side of her character. Such as, Hild teaching the children of the village including Thorfinn’s adopted son, Karli.

These scenes are important as most of the time we have only seen the stubborn and resentful side of Hild. However, Vinland Saga Chapter 188 shows the positive contribution that Hild has been adding behind the scenes. Not just that, but the conversation with Karli also signifies the very important point of discussion – the possibility of Hild forgiving Thorfinn. Karli asks Hild that why does she always fights with his father and did his father do something bad in the past. Ultimately, he questions her that would she ever forgive Thorfinn for whatever he’s done to Hild. To that, Hild stays silent and expresses agitation.

It is quite apparent that Hild is not ready to forgive Thorfinn at this point of the story but the fact she also didn’t say that she will not forgive him tells that she might be on paving her way of pardoning Thorfinn. Despite her hatred, Hild has witnessed the change in Thorfinn’s personality. He is no longer the wild Viking he used to be. Instead, he is now a very reasonable leader who plans to solve everything through wit and peace. Hild’s most interactions with Thorfinn are serious and serve as a reminder to Thorfinn that he will be killed if he goes back to his old ways. But after this conversation with Karli, it would be fair to say that Hild might contemplate properly her future relationship with Thorfinn.

Moving on, we get to see that the bear that Hild was chasing is now hibernating in a safe hole. Observing that, Hild decides to spare the bear and makes her way back. This is also an indicator that Hild has softened down as bears were the predators she hated most. Later on, it gets dark and Hild is seen resting near a fire. She ruminates that she has gotten more familiar with the forest in a quite shorter time and that the forest is rather peaceful with very few beasts around. I take this as an exposition of Hild’s inner state that shows that just like the forest, her heart has also gotten peaceful. There are fewer enemies in her life now and plenty of friends.

Now comes the weird part. Soon after she starts examining the environment around her, a human figure comes near her having a head of a bear. Yes, a human with a bear head. Or a talking bear with a human body. It is unclear whether the bear was an actual human, basically, a shaman wearing a bear head or it was all a Hild’s dream and she dreamt of a talking bear that could be as suggested on this Reddit thread, Muwin the Bear. Well, the important part is that the talking bear asks Hild that why did she spare the previous bear that she was hunting. To that, Hild first answers that it was the fault of her people that they cut down the forests and forced the bear to move towards the humans’ side in order to find some food. Later, when asked about her hatred for the bears as aforementioned that one killed her master, she comments “that was long ago.”

I must say that despite this chapter having very few dialogues but it still highlighted and probably foreshadowed a lot. Hild regarding her sheer detest for the bears as something that was in the past tells that her character has also changed. We don’t know that will Hild’s character be developed to such a point where she will forgive Thorfinn or not but judging from Chapter 188. we can assume that perhaps there is a brighter future ahead.

The chapter ends with the remarks, “In a forest different from the one of that winter,” hinting that it is not only the forest that is different but also Hild.

That’s all for Vinland Saga Chapter 188 discussion and review. For more such content, keep following us.