Some depictions of Angels in anime that may be surprising 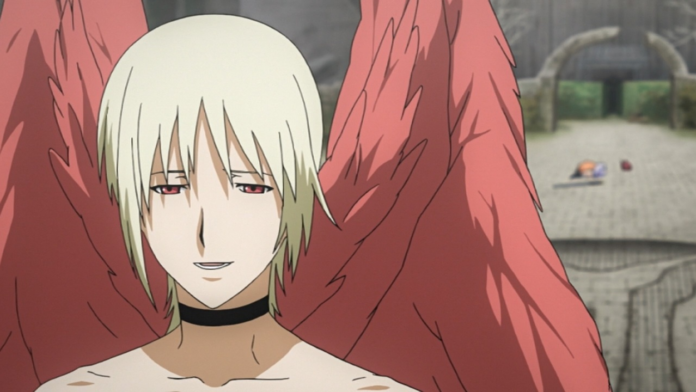 Anime portrays many species and even dares to go into different topics relate to religion and the holy dieties present in them. Some of these anime choose to depict the religion in the safe way, while other s like to play with the concept as bring their own interpretation of what angels. Here we’ll talk about some interesting portrayal of angels in anime where some show the concept well while some miss the mark.

Let’s start with the protagonist and main lead in Heaven’s Lost Property, Ikaros. She is a safe choice as she portrayed as an Angeloid, a machine made to follow orders of their master. At the start of the story, she falls from the sky. After Tomoki resurrects her, she creates a relationship with him and addresses him as master; the imprinting is represented by a chain that runs from her collar to his hand.

Honestly, this depiction is a little underwhelming. There isn’t much exciting to say about the Angeloids in this anime so if you just want to watch it for a new take, go ahead.

Whis is the guide angel attendant and martial arts trainer of Universe 7’s God of Destruction, Beerus. He never leaves his attendant’s side and stays with him, even teaching him some stuff lie martial arts. In his universe, he is undoubtedly the strongest angel after Grand Priest.

He is one of the fastest angels and also know martial arts. Also, his powers and appearance make him look like a god even though he is just an angel, just a fancy one.

Emi Yusa – The Devil is a Part-Timer!

Emi Yusa is the main female protagonist/deuteragonist who fought Demon King Satan. After compelling Satan to flee Ente Isla, Emilia Justina pursues him to modern-day Japan to ensure his demise. Her father was a human while her mother was an archangel which makes her a warrior angel in her world.

But as this is an Isekai anime, she loses her powers in the other world, so it’s fun to see how an angel lives with a usual life as a human. This anime is more of a comedy, so watch it if you want a more fun slice of life anime.

In this series, we follow Rakka, a recently hatched Haibane (a being like an angel), and some other individuals in the city of Glie. This is a walled city with a single gate, through which only a mysterious group known as the Toga is permitted to enter or escape.

This series is focused on how angels are formed and also makes the people question themselves on how they ended up here. An interesting concept indeed.

Next on the list is a fairly unknown Kaworu Nagisa. He is popularly known as Tabris and is the Fifth Child and the eighteenth Angel. SEELE sent him to NERV, as a replacement pilot for Unit-02 after Asuka, carried out a mission against them. Despite being categorized as an Angel, Kaworu is a Seed of Life who occupies a human body, similar to Rei Ayanami.

Despite the fact that Kaworu was only featured in one episode, the character was well-liked by fans and topped popularity polls. Critics found his character lackluster, but if we analyze how he was built, he actually shows how different he is from others in a short time.

One of the most amusing use of the angels in anime trope is by Mnemosyne no Musume-tachi. The series’ main antagonist. Apos, is a hermaphrodite, or more accurately an intersex human, with the traits of both an angel and an immortal, which he claims makes him a “God”. He appears to have no notion of human morals and instead has a cruel sense of beauty and entertainment. His portrayal of an angel is extremely intriguing, to say the least, given that he is an antagonist and a sadist, which contradicts the usual moral compass put on angels.

These are all the different angels in anime whose portrayal was amusing to us. If you have any new additions, do tell us in the comments.